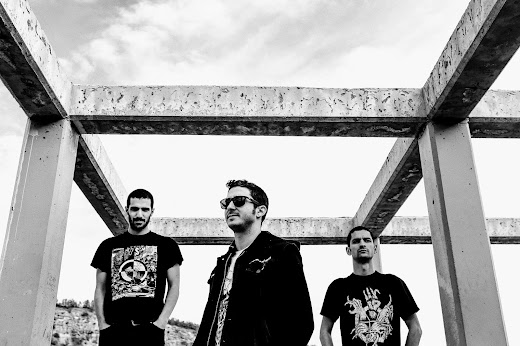 
CHAIN CULT and their like-minded peers draw direct influence from the Dark/New Wave scenes of the 1970-80's, as well as bands like Blitz, Chameleons, The Cure, Dead Moon, Echo & The Bunnymen, The Estranged, Misfits/Samhain, The Ramones, The Sound, Wipers, and Γενιά Του Χάους. Now, CHAIN CULT have returned with their first proper full-length/EP, SHALLOW GAVE, again, released on Hackney, London, UK-based imprint LA VIDA ES UN MUS DISCOS. It's truly a phenomenal 8-song album/EP that takes reference from the aforementioned bands/genres and some and, personally, reminds me a lot of AFI, as well as frontman Davey Havok's various outer-band projects, Blaqk Audio, DREAMCAR, Son of Sam, and XTRMST. Despite the album's slightly "morbid" name, CHAIN CULT's SHALLOW GRAVE is about as frantic, frenzied, lively, charismatic, and unique as you would ever expect a Punk/Hardcore-adjacent album to be in 2019. As of today, CHAIN CULT's SHALLOW GRAVE is now widely available to download, purchase, or stream on digital platforms, as well as in physical 12-inch LP format, via LA VIDA ES UN MUS.


"So, we just released our first full-length with CHAIN CULT! SHALLOW GRAVE has a special place in my heart and I do believe that same goes for my bandmates, ['cause] it marks the end of the '10's, a decade which was the most significant for our lives, so far... It was 10 years of super-active involvement in the world-wide D.I.Y. music scene, 10 years of a really motivated self-education process, a youthful power, and an excessively creative interaction with amazing individuals all around the globe; a decade of cultural and political fermentation among Punks, freaks, anarchists, and radical Left people in squats, autonomous spaces, and various D.I.Y. collectives, and, finally, a lifetime of essential friendships that couldn't have been done out of all this frame and without the ethos which defines it. The future may seem bleaker than ever, but let's try to grasp at the moments we have to stand before the gallows!!

A big love to the best possible companions, @iasonas.pan & @vangelisdimos on the CHAIN CULT journey, special hugs to our bandmates, the crews and the friends of all the bands we have played in, so far (you know who you are, ❤️) the few relatives still able to tolerate us, and, of course, everyone who has supported us by any means in all these years. SHALLOW GRAVE was recorded, mixed, and mastered [by George Christoforidis] at Ignite Music/Studio. Artwork was made by A.D. Visions. Released by LA VIDA ES UN MUS."

Posted by Matt Horowitz at 9:14 AM