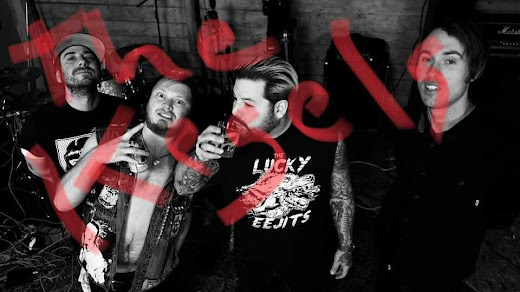 The Kegels are a San Francisco-based Indie/Punk Rock & Rock "N" Roll band, which has been actively performing and recording ever since 2007. The Kegels' current line-up consists of guitarist & vocalist Mortimer "Morty" Lopez, bassist & vocalist Nico Suarez, drummer Brian Colli, and second guitarist & vocalist Adam Hiller. Face to Face, NOFX, Rancid, Lagwagon, Off With Their Heads, Hot Water Music, Strung Out, Dead to Me, AFI, and all kinds of Rock & Punk!!" are listed as Artists We Also Like on The Kegels' Facebook page. The Kegels' brand of unique Pop-friendly Punk Rock has been frequently described as sounding similar to that of both Pennywise & Bad Religion, as well. Morty, Nico, Brian & Adam have self-produced/released several EP's-worth of material over the years, forever cementing themselves as SF Bay Area staples; due in part to "No Tomorrow" from The Kegels' 2012 album of the same name. The group has played gigs at local Punk/Hardcore hot spots, Bottom of The Hill, Slim's, Thee Parkside, The Fillmore, and The Hemlock with beloved bands, such as Me First & The Gimme Gimmes, Smoke or Fire, and NOFX.


The Kegels' latest EP, Blood & Wine, is the proper follow-up to their 2017 EP, Over War. Blood & Wine was preceded by two pre-release singles, "Mystery Girl" and "Defeated," which The Kegels themselves told NEW NOISE effectively "brought [them] back to [their] roots in fast, Street Punk style." The Kegels recorded Blood & Wine during a marathon 5-day session this past February with veteran producer/musician David "Dave" Irish (The Interrupters, Reel Big Fish, The Maxies) at Pot O'Gold Studios in Orange, California. The Kegels, additionally, self-released a music video for title track, "Blood & Wine," directed Nick Pappas featuring an... interesting storyline and live performance footage of the band. The Kegels' Blood & Wine EP is now available to stream, purchase, or download from your preferred digital streaming platform. It's a solid 5-song Pop/Punk "punch in the face" and I sincerely, mean that in the best way humanly possible, fellas! Also, shout-out to Jory White at Vesperize PR for continually sending us releases from phenomenal Punk-Hardcore-adjacent groups!

Posted by Matt Horowitz at 9:30 AM