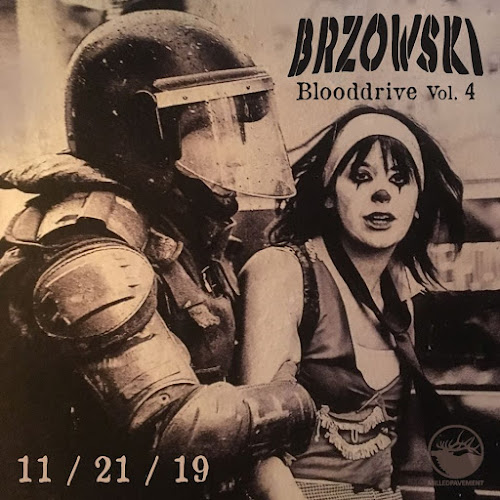 BRZOWSKI, a self-described "touring Post-Rap artist hailing from the icy wastes of New England" hasn't released a proper full-length since 2017 critically-acclaimed ENMITYVILLE. Although, with that said, BRZO has stayed nothing short of inactive over the last nearly three years: 2018 saw the release of his I Had An Accident (IHAA) DIG 2 GRAVES split EP with MC Homeless, as well as 80HRTZ-produced single, "Cemetery Rose" Featuring Renée Coolbrith. So far, this year, in 2019, BRZOWSKI has released a cover of Woody Guthrie's iconic "This Land Is Your Land" from The Multiverse: Season 1, Episode 2, a 5-song score entitled Abduction Themes for a documentary called Otherworldly Amor, appeared on Zak G's "Propaganda" from his Milled Pavement Records-released album, Mutant, and appeared alongside D-FAZ for five tracks from their new album, OneNationUnderDog.


On top of all that, BRZOWSKI has toured across France/Switzerland & Europe with D-FAZ in promotion of said album and he has, also, had a hand in promoting Swordplay's albums Malista & Paperwork and dubldragon.'s Macroforms, which, I believe, were all issued by BRZO & Moshe's Milled Pavement Records. Since ENMITYVILLE, BRZOWSKI has seemingly re-located from Portland, Maine to somewhere in Texas. Now, BRZOWSKI has returned with the fourth installment in his beloved odd-and-ends series, Blooddrive. Upon writing this, Blooddrive, Vol. 4 is barely a mere 24 hours old, although, the 22-track compilation is fairly expansive and encompasses a staggering collection of collection of unreleased songs, demos, collaborations, remixes, and singles spanning from 2011-2019.


"I first got a chance to do a show with BRZOWSKI in Maine, back in 2004. A year or so later, he came down to rock a Baltimore show. Not only did he have a brand new album in hand, but, he, also, had a new rarities collection called Blooddrive, Vol. 1. I thought the idea of an up-and-coming, D.I.Y. rapper going out of their way to complete and document these odds-and-ends tracks was incredible. This was when rappers still found it acceptable to sell self-burned CD-R's of their half-mixed music with the title written on the disc face in Sharpie. Blooddrive felt like you were listening to some kind of secret, alternate BRZOWSKI album and it was, somehow, as complete and realized as the official new album was... It, also, felt like a special "thanks" just for the people that came to see him play live on that tour. I definitely tried to take a page from BRZO's playbook, with how I treat/present my own music. 14 years later, the Blooddrive series is still going strong. Cop the physical version or buy these MP3's for $666."

Posted by Matt Horowitz at 8:51 AM