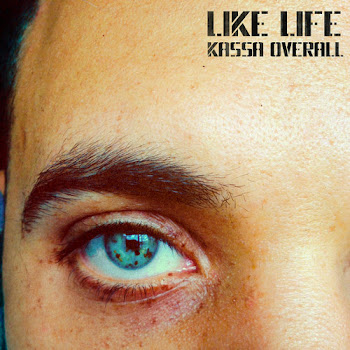 Brooklyn multi-instrumentalist and rapper-producer Kassa Overall is a close affiliate of Kool A.D. and his now-defunct Hip-Hop crew Das Racist. I believe I first got in touch with Overall after discovering his stellar self-released Stargate mixtape, which featured him ferociously rapping over re-worked Katy Perry, Wiz Khalifia, and modern pop radio tracks, and he generously helped facilitate my 2011-12 interview with Victor Vazquez, otherwise known as Kool A.D. While he was previously signed to Vazquez's Greedhead off-shoot imprint Veehead, but since their disbanding, his current label situation is unknown. After years of preparation and recording, Kassa Overall is finally gearing up to release his first proper solo album consisting of entirely original production, which is tentatively titled Like Life, in the not so distant future; even though he's released countless group albums with PEACEFUL SOLUTIONS, TOOTHPASTE, and as an accomplished Jazz drummer has recorded and toured with a long laundry list of contemporary bands.


Kassa Overall himself confirmed in a late night Witzard catch-up email exchange that his upcoming project will include production work from Steel Tipped Dove, Keyboard Kid, Issue, Robert Lux, Carlos Overall, Amaze 88, Yuri Beats, and Francis & The Lights. The FADER premiered the lead video-single from a "forthcoming project that'll roll out over the next month" late Thursday afternoon; Overall self-produced "Cauliflower" and frequent collaborator Slack Barrett directed the inventive quasi-underwater tie dye-accented clip. It's a very simple, yet effective concept that features Kassa Overall rapping underwater in a bathtub (possibly under a piece of plexi-glass) as droplets of food coloring are evenly dispersed throughout the water. "We like to take simple shots and concepts and do them well, rather than show off with big budgets and pricey props," Overall explained about their unique approach to video production. "In the spirit of Hip-Hop, we like to take a couple simple ideas and see how good we can make it."
Posted by Matt Horowitz at 9:28 PM