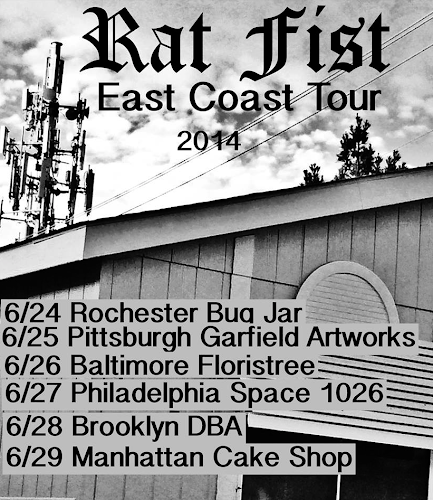 "Rat Fist is the result of a friendship that began over a decade ago in 2003 when [Randy] Randall's former band Wives and [Sean] McGuiness' former band Navies played a house show together in Washington DC. It was then that the two quickly recognized they had a common love for loud, fast, heavy music," notes the newly-formed band's description on R5 Productions' upcoming events page. Rat Fist unveiled a string of six quick-strike East Coast tour dates, which are listed above, along with a righteous teaser single titled "Disrupt Yr DNA" late Tuesday afternoon. It sounds like a harshly grafted mix of both Pissed Jeans and No Age's Noise Rock/Hardcore Punk sounds; while I'm not entirely sure who's on lead vocals, Randall's crunchy feedback-drenched guitar riffs meld perfectly with McGuiness' skull-bashing drum lines littered through out "Disrupt Yr DNA"'s nearly 2:30-minute duration. Despite the fact that Sean McGuiness & Randy Randall's paths had to have crossed during the 11 years since their initial meeting, "after both becoming fathers, they realized there was no time like the present to fire it up." McGuiness flew from Philly to Los Angeles this past winter to work with Randall and producer F. Bermudez to record a collection of self-described "refreshing, face-melting, fist-pounding cuts." While it has yet to be officially announced, I'd almost automatically assume that Rat Fist are signed to legendary Seattle Punk label Sub Pop, since both Pissed Jeans and No Age are on their ever-growing roster. Randy Randall was previously interviewed by SPIN last year as part of a Pissed Jeans web-profile on the eve of their latest release, Honeys; within he commented on their shared anti-industry machine Punk Rock ethos, "There's an element of challenge in there, almost this disregard for the industry side of things, like, 'We get it, but there's not much we can do to fit in' ... because you're never the same. If you're working for an insurance company, if you have a straight job and kids, Punk is a perspective. It's not a fashion trend or a Twitter-like interest. It's not a passing fantasy. You're f*cked for the rest of your life." While Rat Fist's debut album currently lacks any form of solid release date, their primary bands' critically-acclaimed "new" albums, An Object and Honeys are available on Sub Pop.

Posted by Matt Horowitz at 2:41 PM