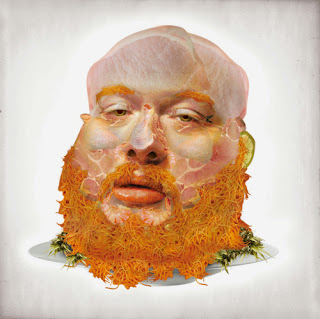 Just mere hours after somewhat cryptically Tweeting, "BLUE CHIPS & BLUE CHIPS 2... RARE CHANDELIERS ON VINYL?" Action Bronson (aka Mr. BAKLAVA) premiered the first episode of his latest non-musical endeavor, F#ck, That's Delicious; VICE's newly-established online food network, Munchies has partnered up with the gourmet chef turned-rapper for a monthly updated web-series "dealing with the often rapped about dining habits of our favorite rapper, Action Bronson." It was seemingly filmed during Bronson's string of New Zealand, South African, and Australian dates in support of Eminem's recently wrapped Rapture Tour. What they've managed to capture within is Action Bronson's New York homecoming from a world-wide tour that initially started back in January; while on his jet-setting journey (further detailed across Adventure Time), he dove off the top of a giant sail boat/yacht, got seasick while amidst a gourmet dinner, jumped into sweaty crowds from 400-50,000 people, had a chance to eat at an incredible South African open fire pit BBQ place called Mzoli's, and a buncha other more shit. Munchies' brave camera crew followed Bronson around New York as he dined at two of the city's best kept secrets, Roberta's and Eddie's Sweet Shop for the first time(s) since being back in the states. F#ck, That's Delicious' final scenes really ends up bringing it all back home for me personally, as Action Bronson is suddenly bombarded by three camera-ready 20-something female fans, which just goes to show how massively popular he's gotten in just a few short years ahead of his proper major label debut. Now, I think it's about damn time that Bronson breaches into [Food] network television, whether it be Beat Bobby Flay, Cut-Throat Kitchen, Chopped All-Stars, etc... we all know that would surely be some colorful, highly entertaining TV! While it isn't exactly a lead single from his forthcoming VICE Records album or anything, sister site Noisey recently premiered a new track from reclusive French DJ-producer Mr. Flash. "Number One" stems from his upcoming debut album Sonic Crusader, which Noisey perfectly describes as "a project where the lounge-core of Italian exploitation cinema intersects with Cold Wave over a Hip-Hop and Electronic background," and features three ferocious sharp-tongued verses from Action Bronson himself, Cities Aviv, and Madlib's little brother Oh No.

Posted by Matt Horowitz at 9:17 PM