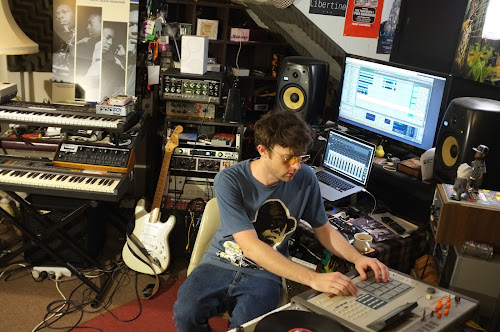 "I was asked to perform at a J Dilla Foundation fundraiser at a bar in Auckland, Neck of The Woods, 13th Feb. 2016 to celebrate the music of J Dilla and to also raise funds. My biggest influences as a producer are Pete Rock, No I.D. Diamond D, DJ Premier, and J Dilla. So, to be asked to play the fundraiser was a big deal for me. I wanted to do something on the night that would capture the creative essence of what I hear in J Dilla's work. To me, Donuts, is the ultimate expression of creativity. I remember first hearing it and being overwhelmed by how much emotion it stirred in me. It has everything: hard beats, mind-blowing sample chops, lyrical message, and some subliminal heavy sh*t... so, for the gig, I thought it was worth going all out and trying something really extreme—to cover Donuts as note-for-note, track-for-track as possible, but in a Basement Funk/home studio vibe. I had spent a year experimenting with modding old Roland drum machines, building 8-bit synths out of old computer game consoles, and creating my own Ableton sample banks of unique synths and sounds, so I wanted to incorporate all this in to my take on Donuts.

I started working on the material a month out from the gig. I managed to get Side A & Side B done for the gig, I played it in order of the original record. Whilst working on the record, Guilty Simpson had a show in Auckland, so I got in contact and asked if he would do a verse on one of my own songs. Whilst we were in the studio, I asked if I could play him some of the Donuts covers I was working on; I remember saying something like, "if you aren't feeling it, let me know and I'll stop it immediately." Last thing I wanted to do was kill his vibe! Anyways, he dug it and said it was cool because it was such an original interpretation of the record. I was totally stoked, as it meant so much getting the seal of approval from one of the ambassadors of Jay Dee's legacy. The last thing I wanted was to be stepping all over the legacy of J Dilla, so yeah, the "OK" from Guilty Simpson was crucial for me to be able to finish the project knowing the [Hip-Hop] heads were down with what I had done."

I. For starters: there’s a phrase commonly associated with Dilla super-fans ourselves, “J DILLA CHANGED MY LIFE.” How did Dilla’s music personally change your life... was there a specific album or project? I would have to say mine is without a doubt, his Ruff Draft EP!

The first 12-inch I [remember purchasing] as a DJ/producer was N’Dea Davenport's "Bullsh**tin.'" I was a Brand New Heavies fan and that 12-inch introduced me to Mos Def and J Dilla mixed the remix, that was a big record for me. Every record he was a part of from [The Roots'] Things Fall Apart (1999) onwards influenced me in one way or another, especially Welcome to Detroit (2001). However, the single most important record was Donuts; it changed my life the moment I heard it. It was such a unique record and creative record that it made me stop and think about what I was doing as a producer and really look inside myself to try and find my own voice or sound without trying to just emulate my heroes.


II. How did you initially go about breaking down, re-assembling, and meticulously re-recording Donuts nearly down to the minute in your unique self-described “Basement Funk/home studio” sound?

I went song-by-song from beginning to end. I loaded each song up in to Ableton Live and mapped out the tempo—quite a few tracks on Donuts shift in tempo, so that was quite a challenge in itself. As I mapped the tempo, I was subconciouly [digesting] each part of the song, bassline, hook, and drum feel. I [then] played keyboard (my Roland MP-600) along to the original version, until I got the right key. At that point, I just laid down instrument by instrument, trying to keep whatever hooks and crucial arrangement ideas Dilla had in the songs.

I used live instruments: drum kit, bass guitar, electric guitar, and also, a few synths. Moog Slim Phatty, Akai MPC-60 (to sample my own playing), Roland MP-600 [Electronic] Piano, and a Roland Rhythm-330 Drum Machine. I love Stereolab and Shoegaze music; actually, "Nothing Like This" is one of my [favorite] Dilla tracks and has been a major influence on my music I make with She’s So Rad, I feel like "Nothing Like This," at it’s core, is a Shoegaze, almost Chillwave track.

IV. You mentioned Dilla affiliate Guilty Simpson visited your Auckland, NZ-based studio whilst you were recording Basement Donuts; what did he think of your Donuts covers album? And where might your collaboration with Guilty ultimately end up?

We were working on a track that I will release next year of my own music featuring Guilty, while we were in the studio, I asked him if he wanted to hear the versions I was working on. I was really nervous about playing it to him because I was f*cking with one of his close associates' music, but... he was feeling it and genuinely appreciated my creative approach to re-interpreting the tracks. That helped me remove any self-doubt I had about messing with J Dilla's music, so I could finish the project with no stress.


V. Would you mind briefly speaking about how the idea for your Dilla re-work, Basement Donuts initially came to fruition? I believe you had previously mentioned a show and fundraiser at Auckland bar, Neck of The Woods.

Yeah, I was asked to play a fundraiser for the Dilla Foundation and because his music means so much to me, I really wanted to make an impact on the night and show all the heads in Auckland that I had not forgotten about the essence that J Dilla’s influence has had on so many beat-makers. Donuts changed my perspective on music and so, I thought a crazy idea was to re-make and perform the entire album in a Basement Funk style, as that is the music I am currently exploring.


VI. Aside from of course James “J Dilla” Yancey, what would you additionally cite as some of your greatest sources of influence and inspiration on Basement Donuts’ overall feel and aesthetic?


VII. Who were some of the additional players and vocalists involved in the creation of Basement Donuts and what were their specific roles?

My wife, Anji sung with me; she doubles most of my voice, like when we sing together in She’s So Rad. Georgia Anne Muldrow features on "Airworks (Forever)." Ruby Walsh sings on a few tracks; she is a great singer—new to the game, but always on-point. Adi Dick sings on a track; he is an old friend and also a total J Dilla head, [so it] was great to be able to [collaborate] on a track.


VIII. Do you have any current plans to do any more J Dilla-centric full-album covers in this same (or even another) style? I would really love to hear your unique version of either his Ruff Draft EP or latest long-lost album, THE DIARY aka Pay Jay!

No plan at all; although, I would love to do a full [on Shoegaze] version of "Nothing Like This."


IX. How did Basement Donuts go from being hand-crafted and fine-tuned for a live show to a limited edition cassette release and now, a wider digital and “chocolate iced” LP on HIT+RUN, as well as Japanese imprint Wonderful Noise?

My man, Jellphonic sent "Workinonit" to HIT+RUN and they were feeling it; from there, it ended up as a HIT+RUN release and a Wonderful Noise (Japan) release. Everyone involved the process is doing it because of their love of Dilla’s music—it’s been an amazing experience!


X. How did you go about reaching out to Georgia Anne Muldrow for “Airworks (Forever),” which is the only tracks that deviates slightly from the running times of Dilla’s original Donuts compositions?

I reached out to her from her reaction to "Airworks" at this discussion. She was feeling that track as hard as I feel that track and I had been working on a re-interpretation of "Airworks" because to me, it sounds so similar to an Aurra track called "Forever." So, she jumped on it, this was [before] the idea to re-make Donuts entirely. Her verse takes me to a place when my dad passed away suddenly; that night, I had a dream where he told me he was on another level now and was really happy. By the sounds of her verse, and I don’t wanna speak on her behalf, but it seems has been through the same thing. It was so on-point that it gave me goosebumps on first listen and still does!


XI. What was your typical recording process for Basement Donuts like... let’s say, for example, Dilla’s Frank Zappa-sampling “Mash?”

1.) Make a drum sample library from my own drum kit in my MPC.

2.) Program up a drum loop in Ableton that matches the original tempo of the track, then add bass and chords.

3.) Pick out the hooks from the [original] track and work out what instruments should feature the hooks. In the case of "Mash," it is orchestral string samples and Moog.


XII. Following your recent Basement Donuts HIT+RUN 12-inch release, what do you have planned next; any She’s So Rad, Leonard Charles, or music from any of your other projects lined up?

I have a She’s So Rad EP I am working on, dreamy Shoegaze stuff. I have a Leonard Charles Modern Funk [album] with a lo-fi Disco tint full-length record that is nearly complete, a Basement Funk record that will feature Wildchild, Guilty Simpson, Declaime [AKA Dudley Perkins], Team Dynamite, and Georgia Anne Muldrow, and then, I still have a few things up my sleeve... but I gotta stay focused on these records, for now. I am easily distracted by amazing music and stupid plans!

Posted by Matt Horowitz at 6:16 AM