"Beats, Lyrics, Cuts & Inside Story:" Roughneck Jihad Returns to The Witzard to Break Down The Red Herring Mixtape (All-around Breakdown) 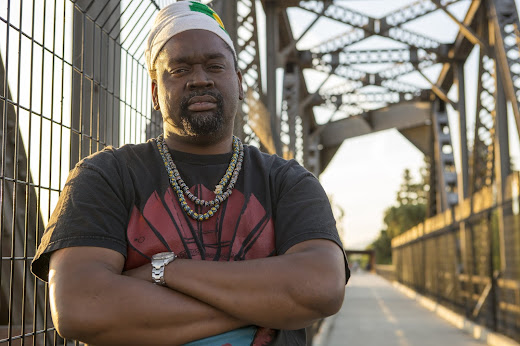 When we last spoke with Third Sight emcee Roughneck Jihad, he was preparing to release his critically-acclaimed 2017 album, THE WRETCHED OF THE VERSE: A MICROPHONE MURDERER'S EXTENDED-PLAY RESPONSE TO UNABRIDGED WACKNESS IN HIP-HOP MUSIC TODAY. Since our comprehensive interview here at The Witzard, Roughneck hasn't slowed down one bit... releasing his IL Torsolo-produced Disco Sinistro EP, The Tarantula Bros. with Third Sight's "The Chef" DJ Du-Funk, and most recently, The Red Herring Mixtape. Next up for Roughneck Jihad is limited edition Tarantula Bros. vinyl, as well as his third solo album, Juan Sequitur (JS) expected to be released this Fall/Winter. JS will feature appearances from DJ Zuckell, Spex, Jason Lee, Abom, IL Torsolo, Sir Dino, Kwantize, and Teran. Enjoy perusing through Roughneck Jihad's Red Herring Mixtape All-around Breakdown below.


"Red Herring is made up of tracks I recorded between 2008-12; production duties are held down by Mr. Aeks, Du-Funk, Drumboy, and Maestro Gamin. The cuts were performed by DJ Vandal from The Netherlands and there are two guest emcees: Maestro Gamin & Drew Fairweather (Crudbump.) The tracks were languishing on my desktop, until Awkward offered to master them. He mastered Orchids & Corpses (2016) the same way. He also, did tracks for Third Sight's IV. In addition, he is remixing a narrative/comic book album, The Red Sentence, for me."

"Elevator Action was one of my favorite arcade games. I loved the intro music and animation and I wasn't even that good at it. I put a lot of quarters into that game for a few minutes gameplay. I also, liked the whole spy thing being replicated in an arcade game and I wanted to riff off that angle and reference being in an elevator and what the whole thing would feel like. The hook on this one is like an outro, really, but I still tried to flip the words in an unexpected way."

"There was a time in my life when I was heavily listening to The Beatles and one of my favorite songs is "Gideon's Bible" ["Rocky Raccoon"]. The title of the song is an homage to that song."

"Is inspired by the Latyrx song where they rhyme at the same time on two channels right and left. [Maestro] Gamin and I did this... well, he ran with a soliloquy and I did the rhyme. It's a major chore of concentration and focus to separate them or digest them simultaneously."

"The Ludovicko Technique was a form of behavior modification used on Alex while he was in prison in the film a Clockwork Orange. This as one of my favorite films as a young man and there are a few references to this film in my catalog. Maestro made the beat and I called in my friend, Drew Fairweather from Crudbump to jump on with me... that guy is so unique and hilarious and woke all at the same time. It's great to work with a guy that just "gets it" and Drew always does."

"As a teenager working at the local mall in Sunnyvale, I would often trip out over the Hot Dog On A Stick workers, who had to wear those costumes and jump up and down on those plungers to make lemonade. The impression those workers made on me was so deep that years later, I named a track after them."

"I make unusual songs fairly often. Du-Funk hit me with this crazy beat and I just let the feelings flow. It was inspired by Jane Goodall, or at least, the idea of her doctor."

"As you may be able to tell, I'm a big rhyme pattern guy. I find the interrelation between rhyming words and groups of words and the spacing, pacing, and intervals very super-extra-stimulating. So, when I get a beat like "Rat Racing," I love to just do my thing and let it flow. I call it "running on the beat" and that's what I got a chance to do on this one. The formula was get your mind right and then, write and that's how it went down. It's also, motivating to write alongside a talented writer like Maestro Gamin; he would constantly keep me on my toes with his rhymes."

"This was inspired by the Curtis Mayfield song, "If There's a Hell Below We're All Gonna Go." It starts out with all the ethnophaulisms and gets you into [it] then, the music drops and bang... magic! When I was younger, I was constantly enraged about sucker MC's and industry types and I wanted to establish that we are all going to the same place in the end. DJ Vandal is on the cuts on this one."

"We were smoking and drinking and getting faded, then, rhyming and "Tellum [Johnny]" is what happened one day. I love these off-kilter joints. The title is a contraction of "tell him, Johnny;" loosely based on the call-and-response musicians, like James Brown on "Make It Funky" or Charles Mingus on "Fables of Faubus," had with their bands during the talking part of the song. It helps to feel this one, if you smoke some hash and drink some marijuana tincture."

"I think, it was my friend and mentor, Sir Dino that said the phrase ["dope pays the rent"] in The Lab, our studio at the time, but it could have been any of The Darc Brothers crew that participated in the cypher, when I heard it. I always thought it was a clever way to describe selling dope and since I consider myself dope, I applied it to selling music for the little twist and bang."

"'What You Need" is a carnal song. The theme is the canvas for me to go through the balancing act of staying on topic and upholding a high level of clever wordplay. There is always the comedic element thrown in with the patterns and the storyline. This is one of the six beats I got from Drumboy, a producer I met through Maestro Gamin—an old friend and Rap partner from The Bay Area—once we reunited in Southern California in the early 2000's. My good friend from The Netherlands, Franck Van Dalen AKA DJ Vandal, did the cuts on this track."

"'Yeah" is a stream-of-consciousness/let-me-flex-my-rhyme-patterns kind of song. I was feeling the beat in a visceral sort of way and that just made me want to flow at that tempo. It's really open, in terms of structure, there is no hook or cuts, it's just the rhymes and the beat."

* BONUS CUT: Maestro Gamin *
"I met a young Maestro in the 90's, while I was going to junior college. He was a super-interesting dude and not only could he write rhymes and freestyle, but he was a beast in the martial arts. We spent a lot of time hanging out, writing rhymes, and having a great time, along with the homie, Adaza, who also rhymed. He moved away to LA and once I got to LA, we reunited. By this time, he was doing production and rhyming. We would party and write and then record and these songs came out of that interaction. He is also, featured on "Suns of Anarchy" on Third Sight's IV (2016.)"

Posted by Matt Horowitz at 5:40 AM