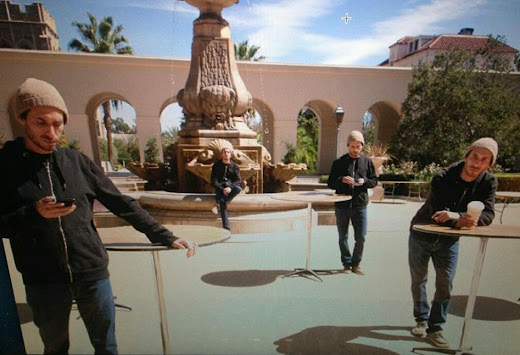 Acid Lab Records (ALR) is a Los Angeles-based record label/crew established in 2011; it's members include BeOND, Express Fresh, Gajah, Myk Mansun, Olmeca, OneWerd, Upword, and 3-man emcee posse, Acid Reign AKA Gajah, BeOND & Olmeca. ALR's members have released a wide array of solo and collaborative projects since 2011 with each other and a handful of affiliates and frequent collaborators, including Kenny Segal, Le Parasite, Willie Green, Japanese emcee MC GEBO, Chrono Triggers, Herrmutt Lobby, Mute Speaker, Destruct, Scotty "Sixo" Trimble, Awkward, and Uncommon Nasa on Gajah's Hand of Gold Are Always Cold. While Acid Lab Records features a wide variety of talent, all of which can be streamed or purchased on ALR's Bandcamp page, this very piece will primarily focus on Gajah & Mute Speaker... hailing from Los Angeles and Cambodia, respectively, Gajah & Mute Speaker are currently gearing up to release their third collaborative album, VENT; preceded by 2013's On & Offspring and Frank Zappa & The Mothers of Invention-flipping ZAPPED (2015) VENT will be released on ALR Tuesday, September 25th.


Just this past weekend, Acid Reign emcee Gajah (@gajahmatik) messaged me on Instagram with the first single from VENT, "Bottle In The Sea" ft. Oso Negro. "This will be me and Rob/Mute Speaker's third project together. We really went into this one slowly, taking it one track at a time 'til we, eventually, had something," Gajah told The Witzard, via an emailed transmission. "We agreed to do the album, but didn't conceptually map out anything, unlike our efforts of the past; he just sent over beats periodically. I applied myself, put my current thoughts into motion and began to vent shamelessly," he tellingly continued. Gajah & Mute Speaker's past works, in my opinion, have a very glitchy late 90's/early 2000's Def Jux-type of feel, strongly indebted to cats like Aesop Rock, Cage, El-P, MURS, and Rob Sonic. "Bottle In The Sea," on the other hand, has a very laid-back feel throughout, almost reminiscent of D'Angelo's Method Man & Redman-assisted "Left & Right" with a touch of Sage Francis & B. Dolan AKA EPIC BEARD MEN's hard-edged Boom-Bap grit. In addition to Oso Negro's "Bottle In The Sea" assist, VENT will feature guest spots from 2Mex, A. Billi Free, BeOND, OneWerd, Woar2, and DJ ETHOS.


"I believe, VENT is our best sounding album together, sonically. Mute Speaker showed his true mixing prowess and MJC [FilthyBroke Recordings] put his mastering genius to work. The Mute Speaker-produced beats are full, yet minimal, allowing me to truly voice my tales of harsh realities that are sure to resonate with the listener. There is a slight uncertainty on my end, concerning this particular release, where reaction is concerned. I think, some will feel me, while others will pity me. But regardless of one's way of thinking, there are people out there living what I'm speaking and I will proudly be their champion, undaunted by popular opinion. Mute Speaker is originally from Brighton, England, but now based in Cambodia. I'm from Los Angeles, CA. The album features 2Mex (The Visionaries/OMD,) A. Billi Free, BeOND, OneWerd, Oso Negro, Woar2, and DJ ETHOS. VENT is a collection of 9 very personal songs that bleed honesty. There is really no better title concerning this record. I can't say it's a masterpiece, but more of a necessary reality piece of my present participle. VENT Release Date: 9/25 via ALR."