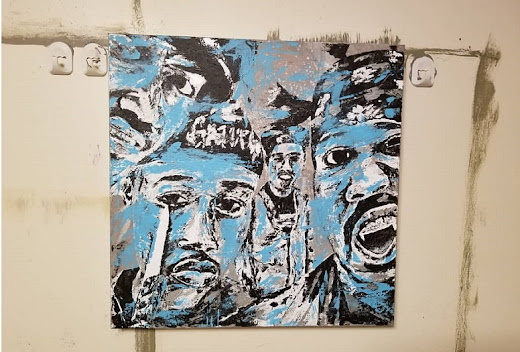 "Hey Carl! So, I was cooking pierogies earlier and made this little mix of your music as MANIKINETER on Spotify. And I was wondering, if you might be interested in making a mix for The Witzard? Maybe, Halloween-themed/tinged and we can include some (or all) of your music as MANIKINETER, as well..." read part of a recent email I sent to Carl Kavorkian a couple weeks ago. The Witzard regulars may, in fact, recognize Kavorkian's name from his recent musical re-birth as Noise Rap behemoth MANIKINETER. He's self-released a staggering three EP's—Mannequin Eater, Missing & Not As They Do—in just two short years, all while fine-tuning his frantic one-man live show. So, lo and behold, now, a matter of weeks later, Carl Kavorkian has hand-selected 22 seasonally-appropriate festive favorites, as part of his exclusive Halloween Playlist for TheWitzard.com. Carl's Halloween mix includes ghoulish selections from everyone from Gravediggaz to George Clinton-led Parliament, TV On The Radio to Mr. Len & Jean Grae, The Tony Danza Tapdance Extravaganza to Portishead, and much, much more. However, I'll just let Carl Kavorkian's Halloween Playlist for TheWitzard.com speak for itself. MANIKINETER's first 3 EP's are now available on Bandcamp through Cult Member Music. Also, keep an ear out for Carl Kavorkian's full-length debut as MANIKINETER expected later this year or early next year.

16. Sour Spirit - "Flesh Off My Palms" from INTENT: Experimental Music In Solidarity with Baltimore Protesters (2015)

Posted by Matt Horowitz at 6:50 AM