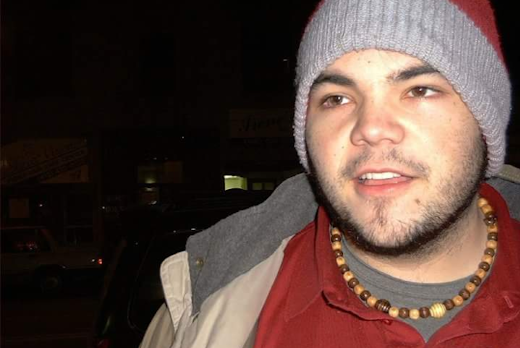 Not entirely unlike his last retrospective release, The Station Signal's Collection of Work, West Virginia emcee and producer Unsung (@UnsungTheRapper) has returned with Umm...'s and The Haunted Apartment. Umm... is one of Steven Miller AKA Unsung's many recording aliases I've been hearing about these last few months. Umm...'s and The Haunted Apartment is, essentially, a long-shelved compilation culled from three separate previously unreleased Umm... albums initially recorded between 2002-04: Umm... and The Surprisingly Well Garnished Plan, U Look Like Pumpkin Pie, and Umm... and The Giant Windmill. Unsung self-recorded the albums onto a dusty old 4-track recorder from a friend, while compiling his first and second Hip-Hop albums, Embrace The Shellfish & TWIN, burned onto CD-R's, and passed out to his friends, family, and classmates nestled inside of "folded and staples [pieces] of paper." For the trio of Umm... albums, Unsung employed a slew of unconventional techniques and instruments, such as acoustic guitars, keyboards, drumming on random objects, answering machine messages, and spacey sound effects.


Unsung says the songs contained within Umm... and The Haunted Apartment were largely inspired by "a lot of lo-fi music anticon was making, at the time, a few Internet relationships, the birth of Emo music, and, of course, Radiohead." Unsung told The Witzard one of his greatest sources of inspiration on Umm... and The Hunted Apartment was a recurring nightmare scenario, which you can read about at length below. I would, however, personally liken Unsung's Umm... and The Haunted Apartment to Bright Eyes, Bon Iver, Stereopathetic Soulmanure-era Beck, Death Cab for Cutie, John Frusciante's From The Sounds Inside (2005,) and Ben Folds. Unsung's freshly dusted off Umm... and The Haunted Apartment is now available to stream or download on Bandcamp on a Name-Your-Price basis, oddly enough, akin to Radiohead's In Rainbows. Unsung's next proper Hip-Hop full-length, An Interior History will be released on Friday, November 9th. I've also, heard, through the grapevine, that Unsung is currently working on a number of projects with Scotsman SaIGO & 'i's AKA Mugwampers!


"One night, I had the same dream at least 30 times. I wake up in my dream and I'm in my bed. The apartment looks just like it really does. I sense that there is something in the kitchen, a presence. I wake myself up, fall back asleep, and it starts the same way. Every time I dream the dream, I go further and further, before waking up. The final time I have this dream that night (which is now morning) I actually, open the curtain and walk into the kitchen. I can feel my heart pounding, but there's no one there. All of a sudden, someone walks out from the bathroom and towards me. It's a sexless spirit. I couldn't recognize either masculine or feminine traits whatsoever.

I remember thinking it was derived from some sort of Native American religion. It urged me to be seated at my table and it began to speak. In the dream, it felt like I listened to it speak for hours/days. It was fascinating! I remembered thinking that I HAVE to remember all of this. The only part of the conversation I remembered was the last thing it said: "you have two people that matter more than anyone else. When you wake up, one of them will die..." I woke up and immediately called my parents and a few friends. Everyone was fine."