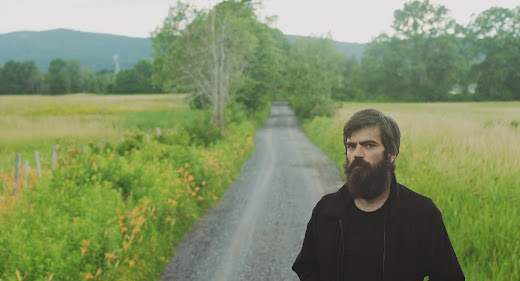 Alright, ladies & germs - now, first and foremost, I don't generally post press statements in full, but this one was, honestly, just too good to pass up: "With Home Alone on Halloween, noted Rock band Titus Andronicus celebrate the spookiest of the seasons by staring into the abyss and confronting the bone-chilling terror, which lies at the haunted heart of our human experience. Bearing the justly feared catalog number "MRG666," the 12-inch EP spans 31 minutes and features three tracks recorded concurrently with the group's most recent full-length, A Productive Cough, offering an Autumnal tableau of dread and decay to complement its LP companion's Springtime visions of re-birth and new possibilities." Essentially, beloved Brooklyn-based Alternative/Hardcore/Punk/Folk quintet, Titus Andronicus (or +@ for short) have returned with their latest seasonally-appropriate offering titled Home Alone On Halloween. +@ kick off the particularly ghoulish affair with a slight re-work on "Home Alone" from their latest long-player, A Productive Cough, now, fittingly dubbed "Home Alone (On Halloween.)"


Home Alone On Halloween EP features a slightly more beefed up version of Titus Andronicus featuring "century" members Liam Benson, R.J. Gordon, Alexander Molini, Patrick Stickles, and Chris Wilson, as well as Cary Kehayan, Kevin S. McMahon, Matt "Money" Miller, Jane Scarpantoni, and Rick Steff. Matt "Money" Miller takes the lead, in lieu of frontman Patrick Stickles, on EP opener "Home Alone (On Halloween)" which, in my humble opinion, give The Misfits' festive mainstay, "Halloween," a run for its discount candy-buying money. It's an absolute bone-crusher of a composition that spans nearly 10 minutes and comes complete with seasonally-appropriate "BOO's," wails, and ghoulish sound effects. Next up is a Stickles-led cover of Bob Dylan's "Only a Hobo," which he originally recorded in 1963 and has appeared, in various forms, on The Bootleg Series, Vol 1-3: Rare & Unreleased 1961-1991, The Bootleg Series, Vol 9: The Witmark Demos: 1962-1964 (2010,) and 2013's Another Self-Portrait (1969-1971): The Bootleg Series, Vol. 10.


Last, but not least on Titus Andronicus' festive frolic is "A Letter Home;" a 17-minute multi-movement opus spanning a multitude of musical genres, styles, and deliveries that echoes +@'s 2015 5-act Punk Rock Opera, The Most Lamentable Tragedy AKA TMLT. Boston's B87FM posted this rather chilling statement attributed to Titus Andronicus frontman and mastermind, Patrick Stickles: "Death is not scary. Everyone has to die, but not everyone gets to die surrounded by love with the satisfaction of a life well-lived. What frightens me, far more than ghouls or goblins, is knowing that I may yet face the former without the comfort of the latter. When it comes to that of which nightmares are made, a Werewolf popping out of the bushes is nothing next to a life without love, when it is too late to turn back." Titus Andronicus' Home Alone On Halloween EP is currently available to purchase in a limited edition run of 12-inch vinyl on "seasonally-appropriate pumpkin-orange vinyl" from Merge Records, as well as digitally from your preferred streaming platform. 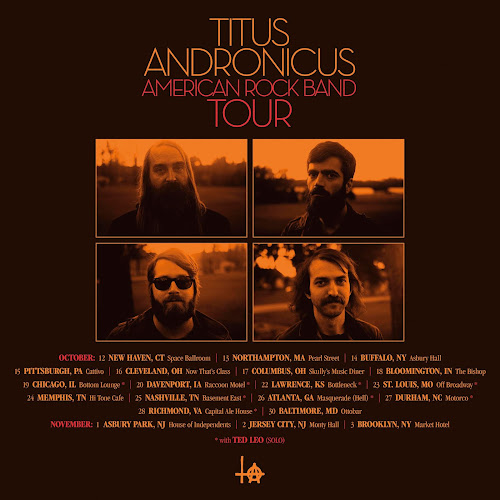 Posted by Matt Horowitz at 9:44 AM