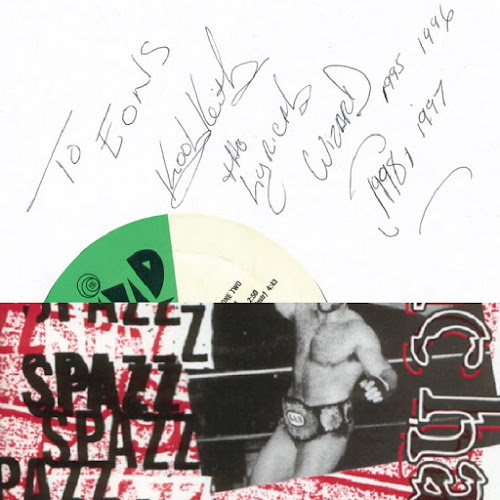 It all started just a few days ago, when I saw a post on F*CKED UP frontman Damian "Pink Eyes" Abraham's Instagram page (@leftfordamian.) He was teasing a then-upcoming episode of his weekly podcast, Turned Out A Punk, featuring Chris Dodge from "The Beastie Boys of Hardcore," SPAZZ. A photograph of @mrchrisdodge was surrounded by images of No Use for A Name, NOFX frontman Fat Mike, CROSSED OUT, Kool Keith, Southern Lord Records, Melt Banana, and The Melvins. I (@sharpcheddar856) posed an exclamatory question through comment, "Woah, now, what's Chris' relation to Kool Keith!?" Fellow Instagram Punker @bengonzales815sl soon Replied: "@sharpcheddar856 Kool Keith did a guest spot on a SPAZZ record," which I soon learned, was in fact, SPAZZ's 1997 album, La Revancha. Later, Damian Abraham himself, actually, Replied back, as well: "@bengonzales815sl @sharpcheddar856 they are also name checked on Dr. Oc." Hip-Hop heads will immediately know, he's of course, referring to Kool Keith's 1996 album, Dr. Octagonecologyst, painstakingly created with Dan The Automator, DJ Qbert & KutMasta Kurt under the collaborative alias of Dr. Octagon.

With a little digital sleuthing, I soon stumbled upon a 2007 RIPPED OPEN BY METAL EXPLOSIONS (ROBME) article fittingly titled "KOOL KEITH: AUTOPSY, DEF LEPPARD AND SPAZZ??!?" Lo and behold, it was penned by Eons One AKA Kung-Fu Dan AKA SPAZZ's own Dan Lactose, who's HEALER / DJ EONS Presents: DANK GOBLINS split was recently featured within these very pages of The Witzard. He quickly confirmed the validity of the 2007 ROBME Blogspot piece in question and had, indeed, met Kool Keith & Dan The Automator that fateful night in either 1995, 1996, 1998, or 1997... Below, we've included DJ Eons One's original 2007 post in full explaining the relationship and mutual admiration between SPAZZ & Kool Keith/Dr. Octagon. While the aforementioned Chris Dodge-centric episode of Turned Out A Punk can currently be found, according to Damian Abraham, "at all the best podcast stores!!!" Kool Keith, Dan The Automator & DJ Qbert miraculously reunited earlier this year for the third proper Dr. Octagon album, Moosebumps: An Exploration Into Modern Day Horripilation. Chris Dodge's latest D-beat/Hardcore band, TRAPPIST, recently unleashed a phenomenal beer-themed album called Ancient Brewing Tactics on Relapse Records. Tankcrimes re-released three essential SPAZZ albums—Crush Kill Destroy, La Revancha & Dwarf Jester Rising—earlier this year, which have now been made available digitally for the first time in 20+ years.


"I used to play in a Hardcore band called SPAZZ. We were around from 1993-2000 and put out a ton of records and played a bunch of shows. We recorded our second album, La Revancha, in 1997, which had a drop by Kool Keith on it. It totally bugged everyone out, at the time, (including myself) and I'm constantly asked to tell the story how it all came about, so I figured I'd write it up here and give you all the real deal.

SPAZZ was heavily inspired by the Underground Hip-Hop explosion of the 90's. Hirax Max (drums) and I were avid listeners of college radio mix shows and I was DJ'ing and collecting Hip-Hop 12-inches and making beats, much to the chagrin of some die-hard punks. If you check out our lyrics, there's tons of references to old Hip-Hop tracks and we even named our third album, Crush Kill Destroy, as an homage to Organized Konfusion homaging the [Ultramagnetic MC's]. I can safely say I was listening to a lot more Hip-Hop than Hardcore while we were doing the band.

Our friend, Neil, was a childhood friend of Dan The Automator and had met Keith [when he] took a trip with Dan out to NY. Neil told of Keith's infamous peep show and video arcade route and told us Keith's pockets were bulging with change ready to begin the trek. He even brought Max back a signed promo poster for the Four Horsemen LP. I was jealous. One night, Max calls me up and says Neil had just called him to see if we wanted to meet Kool Keith up in SF. Max had school or something, so he called me and said I should call Neil back ASAP. I called Neil, got directions and in my haste, grabbed my recently purchased Basement Tapes [1984-1990] LP that happened to be sitting out... Keith was in town recording the Dr. Octagon LP at Dan's parents' house. I drove up to SF, met Neil in front of the house, and we ended up chillin' in Dan's room while they were working on "Girl Let Me Touch You," waiting for them to take a break. [They] finished their take and Keith emerged from the makeshift vocal booth. We chopped it up a bit and I showed him the Basement Tapes LP and he got pretty bummed."

"He asked where I got it and he said Ced was doing all sorts of sh*t with their material and he had no say in any of it. I told him where I picked it up and he asked Dan if they could go there tomorrow so he could buy one. Then, he reached down beside Dan's bed and pulled out this huge blue duffle bag. "Do you like Max Hardcore?" he asked, as he unzipped the bag, which was stuffed full of VHS porno tapes. He started pulling out different tapes and talking about [them]. We talked porn for a minute. Somehow, we started talking about Metal bands—I think, Neil told Keith he should check out SPAZZ or something. "Do you like Gorefest?" he asked. I told him they were alright. "Do you like Autopsy?" I told him, of course, and that I knew one of those dudes. Keith was pumped. I told him I had a tape of the record we were working on and Dan The Automator threw it in, so we could check it out. Keith was bugging out on it. He asked if I could do that same guitar sound on the record they were working on. I said, "no problem" and told him I would get in touch with them tomorrow. I asked Keith if he could do a shout-out for us and we would put it on the record. Automator flipped the tape over and recorded Keith's drop that you hear on La Revancha.

The next day, I called the phone number Automator had given me to figure out if and when I could go back up to the studio and do some guitar. I never got through and they never called me back. "Andy Boy" is credited as playing guitar on the track and while I cannot confirm or deny it, Neil told me it was Andy ["Airbourne" Anderson] from Attitude Adjustment. I was happy enough to chill with Keith and get that drop. To this day, it has to be one of the most bonkers Hardcore/Hip-Hop cross-overs in the history of music. The Judgement Night soundtrack has nothin' on this!

A few days later, Neil called and told us that Keith had mentioned SPAZZ in one of his new rhymes. What the f**k??? We never thought it would see the light of day, until we heard "I'm Destructive." Holy sh*t! The line taken almost word-for-word from the conversation Keith and I had that night. And then, Dr. Octagon drops and completely blows up, etc. etc. I'm not sure how many people who were listening to SPAZZ were also, listening to Ultramagnetic, at the time, but it seemed that EVERYONE was listening to the Dr. Octagon LP. A lot of people were catching the SPAZZ reference and asking us about it. I'm not sure if Keith ever got a copy of La Revancha (I'm still holding one for you, man!) but I hope someone has played it for him, at some point. It's one of my favorite records we recorded and I'm stoked to have a Hip-Hop legend on it. Yeah, I know that this post is on some fanboy ish, but it's Poppa Large; The One, Rhythm X; KOOL MOTHERF***IN' KEITH!!!" 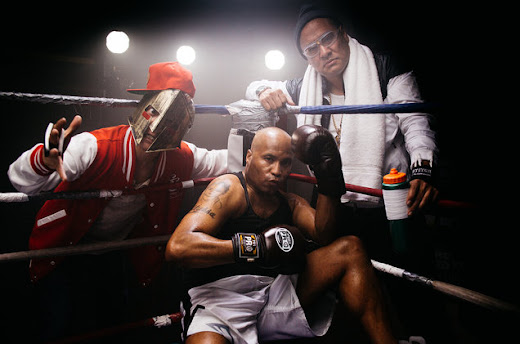 Posted by Matt Horowitz at 8:42 AM