Here and Nowhere Else: Cloud Nothings - "I'm Not Part of Me" (Carpark/Mom + Pop) 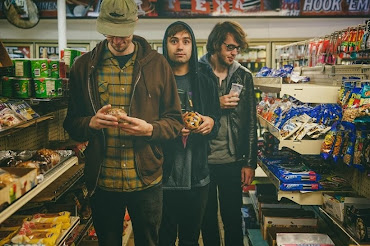 "I'm Not Part of Me" is the perfect kind of disjointed, yet introspective brand of Lemonheads-influenced Indie Rock that's almost tailor-made for use on modern Rom-Com film soundtracks. Cloud Nothings frontman Dylan Baldi recently described the band's forthcoming new album, Here and Nowhere Else as more "refined" and "subtle" that their previous works. Baldi further elaborated in a press release that "I was feeling pretty good about everything, so I just made stuff that made me happy. I had nothing to be angry about really, so the approach was more positive and less 'fuck everything.'" Ahead of Here and Nowhere Else's March 26-April 1st world-wide release, "I'm Not Part of Me" was unleashed Monday morning along with cover art, an 8-song tracklist, proper release details, etc. Since being initially established by Dylan Baldi as a one-man bedroom project back in 2009, Cloud Nothings has grown to include TJ Duke & Jayson Gerycz, who were brought on as full-time band members during third album, Attack On Memory's roll-out (2012). "Been itching to talk about this for a while, so I'm glad @cloud_nothings dropped their best song yet as a single," Tweeted Pitchfork writer Ian Cohen, who's seemingly been spinning "I'm Not Part of Me" and the sonic fruits of Baldi and friends' labors for a while now. Here and Nowhere Else is currently available for pre-order in North America through imprints Carpark and Mom + Pop, as of Wednesday morning; a number of deluxe to basic packages are available online... including everything from light blue vinyl and a Michael DeForge-designed shirt to standard CD/download package.

Posted by Matt Horowitz at 1:27 PM