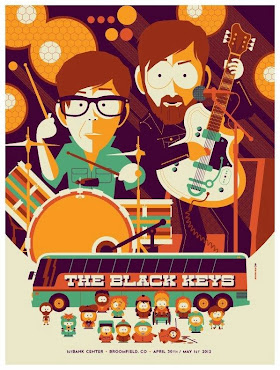 In our web-industry, citing TMZ as a source is basically the real-world journalist equivalent of using Wikipedia as a source on a high school or college senior term paper; it's just something you're better off NOT doing, if possible because sites like these aren't generally the most reliable or accurate sources. But with that said, I think I'm about to commit blogger treason and cite TMZ within this very post (please forgive me!)... Back in late August, Pitchfork reported that Black Keys frontman Dan Auerbach supposedly lost an interesting asset which court papers described as "Bob Dylan hair" amidst his bitter divorce from ex-wife Stephanie Gonis. While it was then "unclear how the hair was obtained, when it was obtained, [or] if the hair [contained] any product," an updated TMZ report uploaded Friday morning specifies that Auerbach was never actually in possession of Dylan's curly locks. Dan Auerbach himself recently told a guerrilla cameraman that the now-infamous "Bob Dylan's hair" listed in court documents was in fact a nickname he and Gonis had given to a psychedelic poster. The poster in question, seemingly titled simply "DYLAN," was designed by artist Milton Glaser during the 1960-70's and looks to be the inspiration behind ?uestlove's long-rumored Mo' Meta Blues jacket design (June 2013). Whether it's really to be believed or not, Auerbach says that "if he ever decides he wants an authentic lock from Bob [Dylan], he now has a pipeline into the singer to get one, thanks to a generous Dylan family member;" The Tennessean continues that "Bob Dylan's son" [Jakob] texted Auerbach after the divorce papers leaked, assuring him that "if you really need a lock of his hair, I can probably get it for you." Yeah, I'll admit, this is all pretty bizarre, but weirdly awesome at the same time... Although it kinda all makes perfect sense: Jakob Dylan recently wrapped up a few mystery sessions at Dan Auerbach's own Nashville-based Easy Eye Sound Studio, where The Black Keys recorded their forthcoming eighth studio album last January-March.