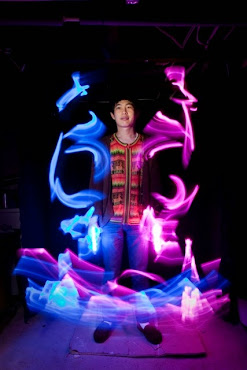 (1) For people not exactly familiar with your musical output, how would you best describe the process of recording with guitar pedals and loops?

I feel like my process is very straightforward. Its just one layer at a time, just like a painting. I use my pedals to change the color or timbre of the guitar. The loop pedal allows me to maintain a canvas, and the pedals and guitar allow me to paint on it.


(2) What sort of new projects, if any, are you currently working on? Would you care to go into a little detail (for each)?

As of now Takako Minekawa and I are working on a new record. I just bought myself a sampler keyboard, its exactly the same model Takako and I use for our duo. I told the public that the last record I made was my last guitar looping record. I wanted to get this sampler for myself and see what kind of sounds I can collect and use for my new adventure of music making.


(3) I recently reviewed your new Soundcloud track, "Foggy Cliffy Night Drive," which is awesome, by the way! Where exactly might that end up?

Thank you! I think for that particular song, its good as it is, it has the right amount of looseness and rawness that I like to keep it as that. I like putting up sketches or songs that has nothing to do with my releases, its just feels more fun that way and it makes it a fun process.


(4) Where would you suggest a new-found Dustin Wong fan start their sonic exploration: Ponytail, Seasons, or another specific part of your discography?

Hmm, that's a tough one and thanks for mentioning Seasons! That record has a special place in my heart since it was all songs written from 2002 to 2007 when I had no idea what I was doing, didn’t really know how to play the guitar that well either. So it was all trial and error, but there was a lot of freedom in that. You know, one thing I really want people to hear is a guitar duo I used to be a part of before Ecstatic Sunshine called Onsen. This was my first experience writing music [with someone] other than myself. My best friend from high school and college and I started writing music together and we didn’t know how to play the guitar but we tried our best, using our best judgment what sounds should come next.
You can download it here (direct link).


(5) How do you think the city in which you live affects your musical output? ie: Baltimore, Japan, etc.

A lot, a city, an apartment can totally change my creative process. Baltimore has so much extroverted energy that was overwhelming at times. For me, its about taking the right amount, no more no less. Japan has such a quiet energy but the introspective aspect is very intense. When I'm on a jam packed train, its quiet but its almost as if I can hear everybody thinking...


(6) It's just about that time of year for everyone's year-end lists; what were some of your personal favorite albums of 2013?


(7) I know it's a couple days late... But what's your personal favorite Christmas-themed movie or CD/song?


(8) So, I'm a self-proclaimed Hip-Hop aficionado myself and I was wondering if you’re into Hip-Hop, too; if so, what were a few of your favorite tracks/albums of 2013?

I don't know if Juke or Chicago Footwork [are] considered Hip-Hop, but Traxman and RP Boo [have] put out some excellent records [in] 2013.


(9) Have you recently discovered any note-worthy new artists, or even friends in bands with new music that you feel my readers should know about?

I saw this band from the UK called HALO HALO in the spring of 2013, they were fantastic! A lot of amazing bands form the UK, Flamingods is another. But like I mentioned earlier, Rod Hamilton and Co La [are] making music I really love.


(10) Little off topic for a music-centric interview... But where would you suggest is the best place to get a burger and a beer, if I'm ever in Baltimore, man?

Oooh! I haven't been there in a year or so, So I don't have the updates but, The Brewer's Art has a killer burger, and in Hamilton there is an excellent burger place called Hamilton Tavern. 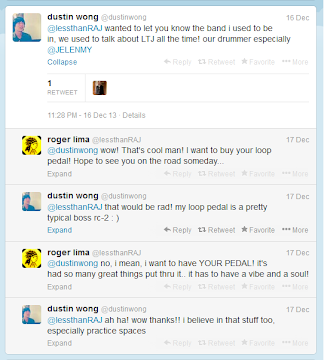 (11) I couldn't help but notice your recent interaction(s) with Less Than Jake bassist Roger Lima (@lessthanRAJ), who I personally Twitter-viewed a few years ago... Would you care to briefly explain your relationship with Less Than Jake's music and talk about how it felt to get some positive feedback from an experienced musician like Roger?

I personally don't know Roger, he Tweeted at me out of the blue, which was a real surprise. It was one of those crazy social networking moments, where someone could actually contact you from a completely different world. I grew up on Pop-Punk, when in middle school Pop-Punk was the best thing ever, I did move on to other type of music. It was a really sad moment of my life when I had to move along to other types of music... I wanted Pop-Punk to have the same effect on me forever. It's a real honor getting praises from Roger, he's been at it for a long time!