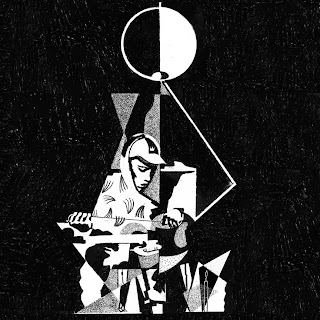 "Archy [Marshall] and I both love Hitchcock and we've spent a lot of time away from music talking about his films... I had this idea of Hitchcock introducing King Krule. I've seen every episode of Hitchcock Presents and every introduction that he gives is brilliant - you could use any episode and it would work. We loved the idea of Archy defying gravity and that being the setting for his performance," lamented interestingly-named director Jamie-James Medina in a recent True Panther web-press release. "A Lizard State" is only the second single pulled from King Krule's August-released debut, 6 Feet Beneath The Moon; modeled after Alfred Hitchcock's 1954 thriller Dial M for Murder, frontman Archy Marshall appears to be performing in some sort of anti-gravity room. 19-year-old Marshall kinda sounds like a whiskey-soaked Beat-Jazz singer mashed with a slightly misguided Lil' Wayne-like cadence (ie: "You're a bunch of f**king fat bitches"), as my lovely girlfriend noted upon viewing the black-and-white "Lizard State" video. Her and I were lucky enough to witness King Krule's blistering string of state-side dates back in early December at Philly's very own hole-in-the-wall bar/venue, Johnny Brenda's. What Jamie-James Medina has somehow manged to create seamlessly melds styles new and old, which I feel is basically the sheer epitome of King Krule; from his vaguely Beatnik-like sensibility, broad-shouldered suits, and Hip-Hop-tinged 2 Tone Ska swagger. Needles to say, 6 Feet Beneath The Moon is now available for your mass audio-consumption, and it's quite honestly one of 2012's best albums!

Posted by Matt Horowitz at 2:38 PM