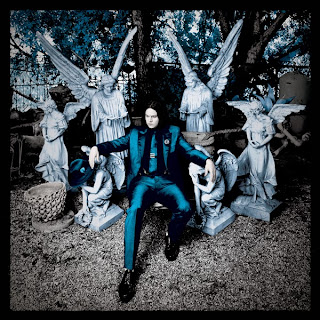 "There are kids at school who dress like everybody else, because they don't know what to do, and there are musicians like that, too," Jack White recently told Rolling Stone in a particularly telling no-holds-barred interview. "I'll hear TV commercials where the music's ripping off sounds of mine, to the point I think it's me. Half the time, it's The Black Keys," he continued. It's only the latest set of comments accumulated in an on-going public feud with Dan Auerbach & Patrick Carney, which originally erupted when TMZ leaked a batch of White's private emails last year. The same Rolling Stone interview, in support of this forthcoming solo album Lazaretto, somehow managed to bash former bandmate Meg White, Lana del Rey, Adele, Duffy, Danger Mouse, and the late Amy Winehouse, which have since been retracted. Jack White seems to have been converted to the age-old school of thought that nearly all press is good press; a new-found attitude not too dissimilar from that of Kanye West, whom White nearly ended up collaborating with on his recent Industrial-Rap masterpiece, Yeezus. Ahead of his Monday/Tuesday night appearance on The Tonight Show, Jack White unleashed the proper music video for his award-winning world's fastest record album single, "Lazaretto." French directing team Jonas & François have executed a stark black-and-white clip to match the underlying aesthetic echoed throughout White's gritty Blues Rock-influenced track. It's a fairly simple music video treatment, which manages to incorporate quick-strike scenes littered with broken glass, blazing fire, shadow-executed guitar solos, a bitchin' sports car doing donuts, White savagely spitting on the camera, band performance shots, transgender dancers, and dueling mandolins. Jack White's long-awaited second solo album, Lazaretto is out this Tuesday June 10th and quite honestly, Third Man's one-of-a-kind $20 ULTRA LP package is really the only way to go, even if you're just a casual White Stripes fan.