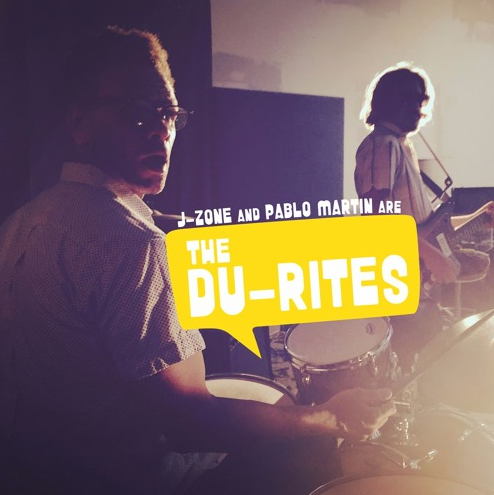 "The Du-Rites finally drop a full song to check out. "Bug Juice" now on Soundcloud (who are a bunch of squares a bunch of squares and simps for not having a "Funk" option in their genre drop[-down] menu, but "Trap" is available). To hear: my website link in bio - newest post or soundcloud.com/thedurites. 7-inch single later next month; album late Fall," multi-instrumentalist and Hip-Hop producer Jay "J-Zone" Mumford wrote within a recent aptly-titled @jzonedontig Instagram post. Still hot on the heels of his latest solo album, Fish-n-Grits, which is made up of a gaggle of limited edition vinyl-only 7-inch releases dating as far back as 2014 and new material, J-Zone has readied "probably the closest to what [he] aspired to in my Funk-drenched 80's childhood" in the form of a newly-minted 2-man Funk band, fittingly titled The Du-Rites. J-Zone is currently preparing a 7-inch Funk instrumental EP with his long-time engineer and revered Tom Tom Club guitarist, Pablo Martin; according to The Du-Rites' Soundcloud description, Martin plays lead and rhythm guitars, bass guitar, and synthesizer, while J-Zone mans drums, organ, bass guitar, turntables, and "hand percussion instruments that require little skill."


Self-described husband, dad, crate-digger, beard cultivator, and Flea Market Funk founder DJ Prestige heroically recounted "Bug Juice" as "pure Funk with no option on Soundcloud for the Funk genre, this may be the record that makes them put Funk in there, seriously. This instrumental is heavy, and J-Zone's drum break towards the end solidifies this as one of our faves of 2016." J-Zone & Pablo Martin are currently holed up in the studio readying their "Bug Juice" 7-inch EP for September with a full-length album to likely follow as soon as October or November. J-Zone's own on-site govillaingo.com biography additionally notes that he's currently "also preparing for the roll out of SuperBlack," yet another super-group formed with the likes of legendary De La Soul-affiliated producer Prince Paul and American TV producer, filmmaker, writer, and The White Mandingos member Sacha Jenkins. "Um, I pretty much think of myself as like a jack of all trades, but master of none— that's my tagline; I mean, I'm not a master producer, I'm not a master emcee, I'm not a master writer, I'm not a master drummer, I'm not a master DJ, I'm not a master musician, engineer, etc." J-Zone lamented during the introduction to a rather self-loathing Fish-N-Grits promo uploaded to his wonderfully-titled personal YouTube channel, The Onion Ring Pimp (which I personally vote as the title for his forthcoming eighth studio album).
Posted by Matt Horowitz at 8:37 PM