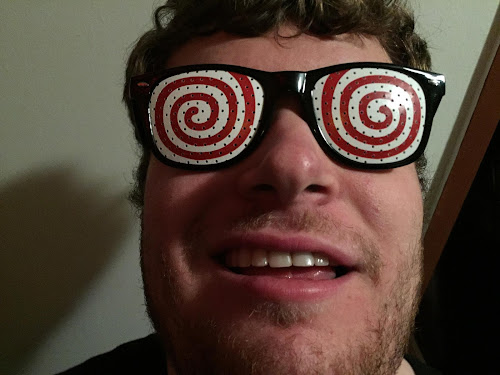 Mere hours before penning this very piece you are about to embark upon, I was taking a late night scroll through Twitter and happened to stumble upon HYPEBEAST Editor Ben Roazen (@broazay)'s recent interview with [adult swim] Vice President & Creative Director Jason DeMarco (@Clarknova1.) DeMarco is of course, responsible in part for [adult swim]'s seventh annual Singles Program, Williams Street Records, DANGERDOOM's THE MOUSE AND THE MASK, and bringing together Run The Jewels, amongst countless animated/musical triumphs. I was, as a matter of fact, at the time, trying to figure out a slightly unique angle to approach this Darko The Super BUMMER EVERY SUMMER write-up and VOILA... Near the end of HYPEBEAST's interview, Ben Roazen asked Jason DeMarco to briefly discuss [adult swim]'s storied years-long working relationship with DOOM; to which DeMarco replied in part, "I've got paintings that DOOM made for me on my desk. Like I said, I wanna build these relationships and have them be fruitful and continuous. It's a refreshing change for someone like DOOM, who's used to people trying to steal their money all the time. As far as now, DOOM's working. I can't say much more, but I'm definitely doing more with [DOOM & Danger Mouse]."


And to be honest, that's exactly how I feel about my friend and as you well know by now, frequent collaborator Evan Souza AKA Darko The Super. He's an extremely talented and very unique aspiring Philly-based rapper-producer, who like all of us, just needs a little reassurance and affirmation from time to time. Darko The Super is currently readying to unleash his 60th album, Watered-Down Demon Fuzz this August, as well as Return to The Hell Hole Store with partner-in-rhyme ialive on June 23rd. I first met Darko about a year or so ago after reading a detailed interview John "Jumbled" Bachman conducted along with ialive about their then-forthcoming The Hell Hole Store album on Already Dead Tapes. It's been grrr-eat working with Darko The Super and over the span of the past year, we've collaborated on a number of unique features, profiles, reviews, interviews, U DONT DESERVE THIS BEAUTIFUL ART artist spotlights, and even a Darko-penned guest post for The Witzard. It's honestly, one of the strongest and most plentiful working relationships and friendships I've managed to build up and maintain during all my years writing and running this very site! Darko The Super's latest beat tape, BUMMER EVERY SUMMER, is currently available for streaming or purchase for just $3.11 at his U DONT DESERVE THIS BEAUTIFUL ART Bandcamp page with an additional 12th bonus track, upon purchase.


"BUMMER EVERY SUMMER is a beat tape of some stuff I made while working on Watered-Down Demon Fuzz, plus some older random songs I went back to. I like putting together and releasing albums—it's fun for me—so, I try to do it often. This album is mostly filler and some killer, in my opinion. I love the title—it's something I had in mind already—then, when I heard the line from [Frank Zappa &] The Mothers of Invention's Absolutely Free album, I knew I wanted to use it for something. The artwork was fun to work on; I have all these old photos from when I was little that I found on a hard drive and have been using for my artwork. That’s me buried in the sand at the beach one summer. I wish I had more to say about this album, but I've been so depressed and hoped releasing this would cheer me up somehow, but it's not working. Thank you to anyone who enjoys it," Doc Heller AKA Darko The Super detailed within an emailed statement. BUMMER EVERY SUMMER features a wide array of characteristically Darko instrumentals, album left-overs, previously unreleased tracks, quick vocal interludes, late 90's sample flips, and much, much more! "Breed" samples The Breeders' "Cannonball," "What Are We Doing? What's Going On?" flips Linda Perry-led 4 Non Blondes' "What's Up," "Check Out These Wheel Deals!" samples Tears for Fears and is actually a left-over from Apocalyptic Bastard, Juice Newton "Angel of The Morning"-flipping "One for Homeboy Sandman," Billy Joel "The Longest Time"-sampling, a cover of Tommy Maris' Bud Ross-penned 1971 single "Guess I'll Never," and a bonus instrumental fittingly titled "Kool A.D. Rhymed to This for 6 Minutes," as well as two Darko-led vocal tracks: Harvey Danger-sampling "And I Don't Even Own a TV (Doc Heller's Dangerous Remix)" and "Looney Bin Loser."

Posted by Matt Horowitz at 8:28 AM