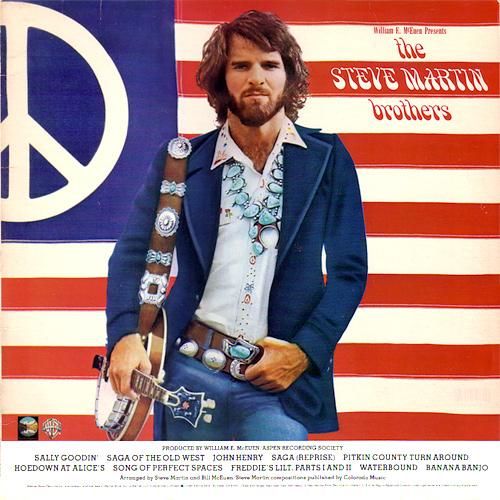 Steve Martin's long-standing and storied relationship with Hip-Hop goes back nearly 30 years. It seems to have all started with "The Steve Martin" from EPMD's critically-acclaimed and genre-shaping debut Strictly Business (1988) which goes a little something like this:

"Well, I have a new dance, that you all must learn
You may have seen the Pee-Wee Herman, but it's had it's turn
Now, this brand new dance, I know you not with it
You might break your neck, to really try to get it
If you seen the clumsy movie it was called The Jerk
You had to check out Steve Martin, as he started to work
He was doin' freaky moves with his feet and head
With his blue farmer suit and his big Pro-Keds."

It appears as though, according to YouTube's Learn Hip Hop Dance instructor MahaloDance, "The Steve Martin" is also "an old school Hip-Hop move," which I would assume was likely inspired by EPMD's 1988 album track of the same name. Lest we forget, Steve Martin starred within 2013 American Comedy film Bringing Down The House alongside Queen Latifah, Eugene "Jim's Dad" Levy, Betty White, and Angus T. Jones from Two and a Half Men; a film fittingly billed as "When a lonely guy meets a woman on The Internet who happens to be in prison, she breaks out to get him to prove her innocence, and proceeds to wreak havoc on his middle-class life." At one point within the Adam Shankman-directed movie, Martin's character Peter Sanderson buys an Enyce jersey and outfit from a young African-American man (whom he calls "homeboy") and proceeds to make his way through a club hilariosuly "dancing" with women nearly half his age. Bringing Down The House's Hollywood Records-released soundtrack additionally features rhymes from the likes of Jadakiss & Eve, Foxy Brown, Queen Latifah herself, Floetry, Lil' Wayne, Big Tymers & TQ, Pharrell-fronted N*E*R*D, Kelly Price, Robert Palmer, and Barry White.


The Witzard's latest interview subjects, Zilla Rocca & Small Professor (collectively known as Career Crooks) recently partook in a similarly-minded with interview with London-based writer and GrownUpRap Editor Ben Pedroche. Along with said Zilla & Small Pro interview, Grown Up Rap additionally premiered Career Crooks' Bob Sweeney-directed music video for Good Luck with That's incredibly infectious stand-out "Steve Martin." After seeing the "Steve Martin" premier at GrownUpRap, I promptly reached out toboth Small Professor & Zilla Rocca, via email; with Small Pro stating: "[it's the] second video from Good Luck With That. Watch Zilla demonstrate his South Philly Rap hands technique and me stare menacingly into the camera, while inexplicably wearing a wrestling mask. Learn the "Steve Martin" dance from YouTube and do it to the song. Our album is out now, cop or stream it wherever you regularly do either. Eff Bill Maher!" Smalls' partner-in-crime, Zilla Rocca, further detailing within a separate email: "'Steve Martin" is a super-old song, one of the first [collaborations] between us. The original beat ended up on Small Pro's remix project Gigantic, Vol. 0 (2012) on a song with me and Curly Castro, "Welcome to The Holodeck" Remix. So, the retail version is the polar opposite in every way. I always loved the song, so I figured we should revisit it for the Career Crooks album. Smalls cooked up the remix and now, we have the video, which is Small Pro's first ever video appearance in his Rap life."
Posted by Matt Horowitz at 8:49 AM