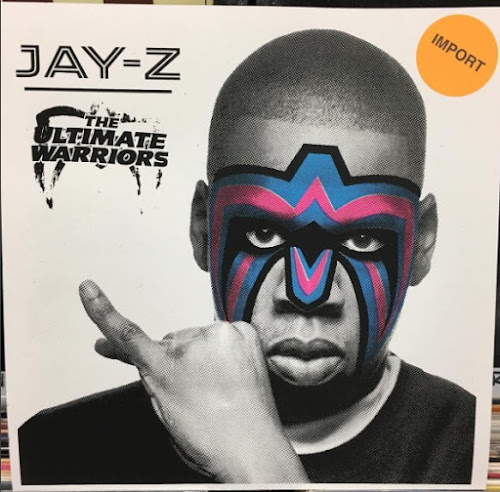 
But back to the coveted JAY-Z/UW split 12-inch... this past Record Store Day 2017 was quite a rainy, messy day and to be honest, I haven't participated in the past few RSD's just simply because the "exclusive" releases aren't as good as they used to be; unfortunately now, it seems to be more of a cash cow than anything else. As I have the last few years, I found a few select releases I really dug and perused them online, rather than going out to a record store and braving troves of deep-pocketed hipsters—one of said releases was a mysterious JAY-Z/Ultimate Warriors split limited to 30 copies (19 available) seemingly only in-store at Double Decker Records located in the heart of Allentown, PA. Even though Double Decker appeared to implement a rather strict "No Mail-Order / No Holds" policy, my wonderful fiance got on the phone with Alex at Double Decker Records that rainy weekend and somehow managed to secure copies 16/30 and 18/30 of said JAY-Z/Ultimate Warriors split 12-inch by the following Monday! I've since spoken with Double Decker Records employee and @YOBABYSUP curator Alex Sanchez at particular length about what he's fittingly dubbed "jay z uw 12.'" What you'll find below is a quick, yet extremely thorough 5-question interview with Alex Sanchez outlining the creation of what he calls "a joke that went too far."

I. How did you initially come up with the idea behind Double Decker Records' Record Store Day "Exclusive" JAY-Z/Ultimate Warriors split 12-inch? What did you then, have to do to make it a reality?

Jamie from [Double Decker] and I have have always seen [Record Store Day] as a goofy gimmick, rather than something that actually helps independent stores. Its great if they want to promote independent shops, but the faux "collectibles" they trick people into ordering can really put a [hurting] on a shop's bottom line. I came up with the idea to make a joke RSD UW's 7-inch a few years ago. I've known The [Ultimate] Warriors for a long time and knew they always loved the art on the Kenmores/Griswalds split 7-inch for its 90's computer-generated terribleness. A box of Warriors Dogfather EP's was found in the basement and I thought it would be funny to make a fake RSD release and use the Kenmores art; basically, a joke that no one wold get, outside of about five people. My friend Giancarlo altered the art in Photoshop, Reject at LVAC screened the covers, and the 7-inch sold out super-fast. This 12-inch was basically just the same thing: a joke that went too far.

II. How did you come up with the concepts behind your JAY-Z/Ultimate Warriors split's magnificent (might I add) Jay Z in a luchador mask cover, various tip-on hand silk-screened inner sleeves, and reverse sleeve "sponsored by" RecordStoreDay.com, Roc-A-Fella Records, Doppelganger, WWF, Square of Opposition, Hate The Eighties, Coliseum Video, Midway, and White Denim?

The concept was making fun of the stupid Side-By-Side Series RSD has: pair two bands that would never have a split together. In the basement of Double Decker, there are tons of factory-sealed cases of early 2000's Rap 12-inches. There were a couple of cases of the JAY-Z record ["99 Problems,"] so I grabbed one of those. Found a pic of JAY-Z from one of his covers that was really big and then, LVAC's art department added The Ultimate Warrior face paint in Photoshop. "Sponsored" definitely needs to be in quotes. No one had any idea they were releasing this, except me and my old label isn't even on there. (You should take out tip-on sleeve; these are just screened on cardstock.)


III. I remember you mentioning you ran the idea behind Double Decker's JAY-Z/UW split by bassist Brad Fry early on... but did you run it by his fellow Pissed Jeans bandmates and Ultimate Warriors founders Matt Korvette and Randy Huth, as well? What did they think of the awesomely absurd concept?

Nope. I mentioned doing something to Brad [Fry], he laughed and then, I just did everything else without them knowing anything about it. They havent even seen the record yet because I didn't give them their copies yet

IV. While my personal copy (18/30) features Side A of JAY's Def Jam-pressed "99 Problems" single and an unspecified side of The Ultimate Warriors' Our Gimmick Is Wrestling LP on bowling ball blue wax... how many different variations are there? And what exactly is contained on the UW side?

Just whatever colors the original Warriors LP's are on and some copies have Side 1 playable and some have Side 2, but that's it.

V. What do you guys currently have in mind to attempt to concoct for next year's Record Store Day festivities? And what do you think are the odds of Double Decker Records/YO! BABY SUP ever scoring an officially-sanctioned RSD release?

No plans and 100% never happening. I can't imagine RSD likes people making fun of them, but who knows.

Posted by Matt Horowitz at 7:35 AM