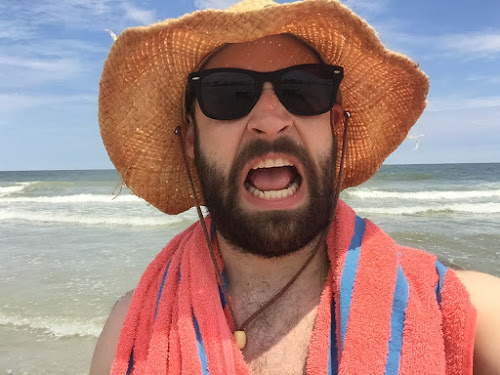 "I'm Lt Headtrip, head of the Queens-based Indie Rap label, we are the karma kids. Also, a part of the Rap group, The Karma Kids. It started with me, Samurai Banana (my DJ/producer,) and Reson, another rapper friend from my hometown on Kent, OH, back in a basement on Long Island in 2008. We were just our Rap group, Sarcasmo and a rotating cast of spitters and Punk bands back then. Nowadays, we throw shows in NYC, book ourselves tours, make music videos, record, mix, help out fellow rappers, etc." reads a brief intro to Lt Headtrip directly from the deranged, often lyrically unhinged man himself. Lt Headtrip has released a number of projects under various monikers and with a handful of groups including, but not limited to Webtrip, BALD AFRO, Sarcasmo, Impervious Machine, and bluelight + Lt Headtrip, since around 2007. Headtrip's New York-based label imprint and collective, we are the karma kids (or The Karma Kids, for short) now includes sharp-tongued emcees Googie, Duncecap, Gruff Lion, and MC Eleven, as well as in-house DJ/producer and Dope Sh*t Podcast co-host Samurai Banana, in addition to Lt Headtrip himself. He previously produced label mate Gruff Lion's 2015 album, death or evolution, but Lt Headtrip's latest album, Comedy of The Filtbeast is his first entirely self-produced public solo release.


Lucky for you, we're premiering a full-album stream of Lt Headtrip's Comedy of The Filthbeast—compliments of Karma Kids' YouTube channel—right here at The Witzard today! Comedy of The Filthbeast is also now (not) coincidentally available for purchase on we are the karma kids' Bandcamp page in either Digital Album or Physical (CD) AKA a "tangible version of the album smothered in original artwork by Damian Rivera" formats for between $8-11. Karma Kids' full-album stream of Comedy of The Filthbeast is one continuous shot of Lt Headtrip down in the very basement wherein he started making music some 15 years ago; it looks like still image for the first few tracks, until Lt Headtrip slowly starts moving around the room, narrowly teetering the line between "funny and creepy." I strongly suggest you listen to the entire Comedy of The Filthbeast stream because 1.) it's extremely dope! and 2.) you really don't wanna miss the calamity that ensues over album closer, "Hang Nails." It's a bit hard to compare Lt Headtrip's Punk-Rap-leaning style to anything I (or you've likely) ever heard before, but if I were hard-pressed, I guess I would have to equate his overall sound and style to something similar to that of Carl Kavorkian's MANIK|NETER, E. Grizzly-fronted Felipe Pupo, JE Double F, or even Death Grips frontman MC Ride's Aggro-Rap delivery.


"I've released a bunch of collaborative Rap projects under the names Webtrip, BALD AFRO, Sarcasmo, and Impervious Machine and I produced an album for label mate Gruff Lion last year, but this is my entirely first self-produced full-length I’ve given the public. I wrote this record over the past five years, since Sarcasmo’s sophomore album, Cousin Id. It’s way too personal. It catalogs the ravings of a sh*t human trying to reconcile his fear of the world. I pulled some help some close colleagues and friends for finishing touches; got a few features and had a sound engineer from Stony Brook, Rob Paterson, master it. The cover art is by Damian Rivera, a street artist from Queens. Other than that, this is all me. Probably too much of me. "The Filthbeast" is a part of me that feeds on chaos and anger. I truly believe we all have this demon inside of us; I’m just hear to scream about it and make it sound cool. Patrick has an M.A. in Linguistics and is pretty mild-mannered. This album is about the duality of an artist who embraces the darkness. I’m on tour right now for a couple weeks and I’m landing in Brooklyn on 7/8 to celebrate the release. [Comedy of The Filthbeast] will be available digitally Tuesday, 6/27."

"Basically, me and [Lt Headtrip] have been making music together for over 10 years now and there's very little we've made that hasn't had each other's fingers on it, in some way. We also share everything we make at pretty much every step of the process. He’ll rap me verses before he puts them over beats; I heard all these beats before he wrote anything to them. Sometimes, he’d ask for suggestions and we’d talk about what might be a good part and maybe tweak a line or two. We’ve been working together so closely for so long that we’re familiar with each other’s styles to the point where we know where the other wants to take a song and we always bounce ideas back and forth throughout the creative process. You'll see in the credits that I recorded the whole album, too. That process isn’t just me checking levels and hitting record. Most times, we’re talking about delivery, sometimes he’ll ask me a specific question about a line, or I’ll tell him he needs to be more aggressive (though, that’s usually not a problem!) Don’t get me wrong, Trip’s 100% the mastermind behind everything and I’m not trying to take credit for anything. He also doesn’t always listen to me either, but we collaborate even when we’re not collaborating, you know? He’s my best friend. He lives literally three minutes away from me and it’d be impossible for us not to influence each other constantly. It’s definitely true for my own music."

Posted by Matt Horowitz at 9:07 AM