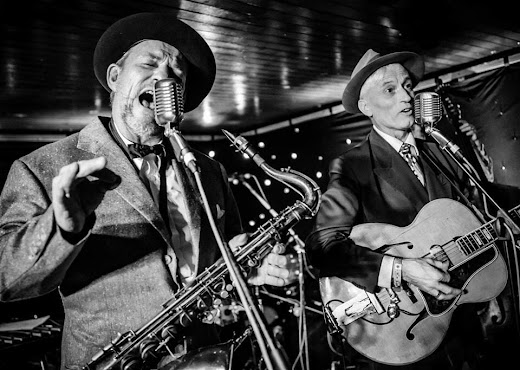 The Hep Chaps are a 1930-40's Hot Jazz/Swing Revivalist act consisting of core members David Howarth & John Wallace. David & John first met each other in 1996 on The West End of London, while performing in a stage production of Good Rockin' Tonight. Since 2005, The Hep Chaps have dually function as a duo, a trio, a quartet, and a sextet with additional players including bassist John Day, guitarist Zac Zdravkovic, "vibe" specialist Roger Beajolais, and a mysterious drummer only known as "Damon." The Hep Chaps have, essentially, forged out their own unique style over the past 23 odd years; mingling together well-known Swing tunes from the 1930-40's with their own originals with "zany lyrics and punchy Swing rhythms" in the same classic style. Further details concerning The Hep Chaps are scarcer than expected across The Internets, but it appears as though an album called Swingin' On Nothing was released on Raucous Records in 2011, it's follow-up, Crazy Rhythm, was seemingly self-released in 2010, and The Hep Chaps' most recent effort, HEPNOTHERAPY was released on CJRO Records in March 2017. Now, it appears as though, The Hep Chaps are planning a proper digital/re-release of HEPNOTHERAPY through esteemed London-based Hip-Hop/Jazz label, BBE Records. One of said originals with "zany lyrics and punchy Swing rhythms," "What Is This Thing Called Love?" is now available to stream on BBE's Bandcamp page. The Hep Chaps' 2017 album, Hepnotherapy, will see a proper re-release on BBE Records Friday, August 23, 2019.


"David Howarth: David started playing and singing professionally with the local Big Band when he was 16. Django Rheinhardt, Hank Williams, and the crooning of Frank Sinatra rank amongst his early influences. He has played in various bands since and acted and played in the original cast of Buddy & Good Rockin' Tonight in The West End. As well as The Hep Chaps, over the last six years, Dave has played with Appalachian Strings, one of Ireland's foremost Bluegrass bands.

John Wallace: John started up with a band called The Stargazers, who were signed by CBS [Records] and had some singles [with] chart success. From there, John played with JoBoxers, The Big Town Playboys, James Taylor Quartet, Little Willy Little Field, and Robert Plant... the list goes on. West End credits include Good Rockin' Tonight & Elvis. At the moment, John is, also, one part of the Acid Swing band Heavy Shift and is working with The Jive Romero's, plus, the Blues group Snakebone.

The Hep Chaps' Sound: Together, The Hep Chaps are a tight, authentically Swinging outfit, perfect for functions, dancing, and cool evenings... very groovy and very special. Mingling well-known Swing tunes from the 1930's & 40's with their own originals in the same classic style, this band is one of the most fun and accessible Dance bands around. Some of their tracks are amongst the most popular tunes for the UK Swing Dancing community, including the quirky and humorous songs "Doin' The Jellyfish," "Just Dug Spuds," and "Hoover The Duvet!" The band have performed at Swing Dance clubs, festivals, parties, and balls all over the UK and in Europe with special appearances at London's famous 100 Club, The Jitterbug Ball, The Rhythm Riot & The Swing Cats Ball, as well as at Copenhagen's famous Jazzhouse." 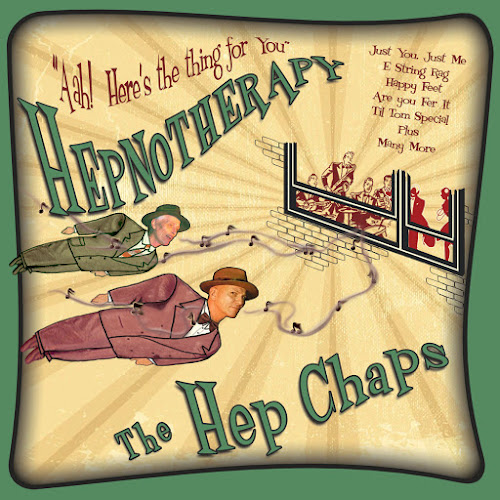