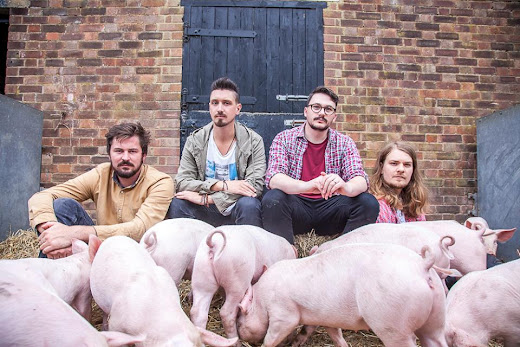 Brutalligators are a Post-Youth/Indie Punk band hailing from South East UK. The band consists of members Luke Murphy-Wearmouth, Paul Wade, Rhys Kirkman & Simon Lee, who readily list Dikembe, Death Cab for Cutie, Smith Street Band, The Hard Aches, The Mountain Goats, Foxing, and American Football amongst "Artists We Also Like." Brutalligators' Facebook page lists their Genres as "Punk, Alt. Indie, Indie, Pop Rock, Emo, Post-Emo, Bed Wetting, and Musicals" and somewhat eerily admit they "have a penchant for long walks on the beach and severed limbs." It appears as though Luke, Paul, Rhys & Simon formed Brutalligators around July 2017 prior to the release of their debut EP, Animals I Wish I'd Seen; through 2018-19, they self-released covers of both Frightened Rabbit's "My Backwards Walk" and Blink-182's "Going Away for (to) College," as well as a 2018 holiday single, "Christmas In July." Now, Brutalligators are gearing up to let loose their second proper EP, Friends I Wish I'd Had, on UK-based D.I.Y. imprint Real Ghost Records. The first single from Brutalligators' forthcoming EP, "Kill Your Heroes" AKA "KYH," is a tried and true Punk/Hardcore ripper that lasts less than two minutes.


Over the weekend, I received a cold-sent email from Real Ghost Records concerning the "four-piece pile of limbs" and their latest music video/single for "Crows" from Friends I Wish I'd Had EP. "🎺🎺 Second single klaxon: 🎺🎺 "Crows" is out for your listening pleasure today, along with Paul [Wade's] insane video for it. If you've ever stayed up late watching 80's music videos (and maybe, one particular one by Nu Shooz) you may recognise it..." Brutalligators posted in celebration of said single. "Crows" was directed and produced by Brutalligators' own Paul Wade, along with Simon & Donna Wade, and is meant to pay homage to Portland-based Freestyle/R&B group Nu Shooz and their 1986 music video for "I Can't Wait." It's definitely a grainy 1980's-reminiscent music video and the song, "Crows" itself is a sun-soaked undeniably infectious Pop-Punk in it's own right. Friends I Wish I'd Had EP is currently available to pre-order directly from Brutalligators' Bandcamp page on both Limited Edition Yellow Cassette and Digital Album formats. It will be widely released on Real Ghost Records on Friday, July 12, 2019.