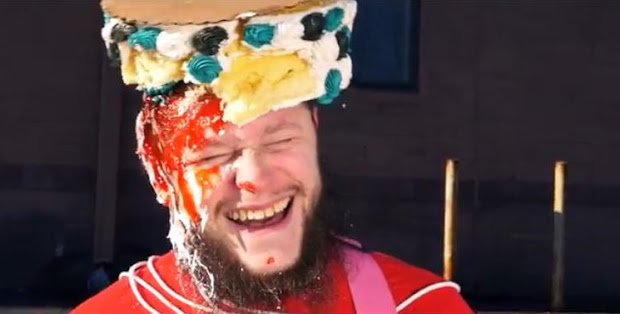 Dan Ex Machina (DXM) is the long-standing, ever-evolving Alternative/Indie Rock project of Cherry Hill, NJ-based musician Dan Weiss. DXM was active as a solo project since the early 2000's, but never officially released any music until early 2020 to properly release finished versions of albums conceived as far back as 16 years ago. For example, Dan Ex Machina's "2020" debut, the awesomely-titled Pity Party Animal, was originally written by Dan Weiss and a crew of musically-abled friends in 2004; years later, it was tracked, mixed, and mastered by Doug Gallo at AGL Sounds in New Brunswick, NJ between September and December 2017. DXM's "2020" follow-up Borat-referencing My Wife was originally written back in 2006 with additional recording, production, mixing, and mastering by Doug Gallo in 2017 at AGL Sounds.


Last year, we spoke with DXM frontman Dan Weiss about both Pity Party Animal & My Wife for a special All-around Breakdown/interview feature right here on The Witzard. Dan Ex Machina released their first sampling of newly-recorded music last year for September 2020's Bandcamp Friday event by way of politically-charged digital single, "F**K 12," which was backed by a cover of Ariana Grande's Pharrell co-written and produced "Sweetener." Now, DXM have returned with their third proper new/old release, a 7-track EP entitled Bail Shag. Again, Bail Shag's contained songs were almost all written within one singular day in 2009, with the exception of "Consider Therapy (Bay Ridge Av)" which was originally written in 2006 and appears as "I Think You Should Consider Therapy" on last year's My Wife, and "(I Don't Wanna Get) Cheated On."


The third DXM record, Bail Shag, is out now, a 20-minute Pop-punk EP I wrote in 2009— in 17 hours. A few years ago, I met the amazing Doug Gallo by chance and tracked it in his bedroom at his mom's house, outsourcing bass and drums to his friends, James Bauman, Scott Tilley, and Ryan Hillsinger," Dan Weiss wrote within a recent Dan Ex Machina Facebook post. "Every one of them brought their A-game. I'm pretty sure making this record is what spawned AGL Sounds into existence—you're welcome, New Jersey. Since then, I've worked with him on four more projects and counting. Live shows really need to come back for this one; please, rock out, per usual," Weiss enthusiastically continued.


Bail Shag EP definitely sounds a bit more frantic and Pop-punk-leaning when compared against both Pity Party Animal & My Wife. It edefinitely evokes the sound of earlt 2000's Pop-punk bands, such as blik-182, Green Day, Sum 41, My Chemical Romance, New Found Glory, The Used, and Yellowcard. Dan Weiss tells us he plans to release a handful of music videos for select songs from both My Wife & Bail Shag EP. Stay tuned, as we expect to hear more new/old msuic from DXM in the months and years to come. Dan Ex Machina's Bail Shag EP, My Wife, and Pity Party Animal are all currently available on streaming services with additional details for each now on Bandcamp.