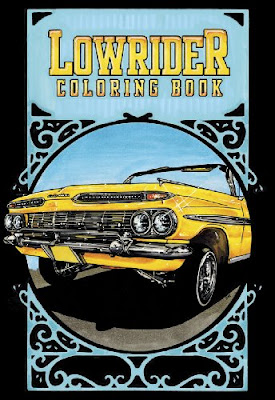 "Impalas, Cadillacs, and Rivieras. In the Lowrider Coloring Book, you will color the classic and most popular Lowrider models. Lowrider culture reaches back to 1930's Los Angeles, where it became popular for style-conscious Latino-Americans to load their cars with sandbags to bring it closer to the road. Style was everything, and when lowered cars were banned in California in the 1950's, it became necessary to find a way to raise and lower the car simply to avoid fines. The solution was to use hydraulics from old fighter planes left over from World War II."


"Rapper Kid Frost showcased lowriding in the early 90's hit "Lowrider," and since then, the cars are closely associated with Hip-Hop culture. Today, lowriding is bigger than ever with thousands of enthusiasts in most parts of the world. All strive to outdo each other with the most elegant varnish, interior, hydraulics, chrome and rims. The custom cars you'll be coloring in the Lowrider Coloring Book were converted by some of the best and most legendary enthusiasts."