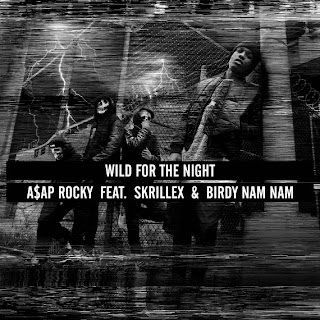 "Wild for The Night" is a pretty vain take on Hip-Hop's own version of the infamous "sex, drugs & Rock "N" Roll" lifestyle, that's quickly become a crusin' around/weekend ramp up kinda jam for my friends and I amongst countless 20-something Middle Americans. A$AP Rocky released it's debauchery-filled music video a couple days ago, which stars A$AP Mob, Skrillex, and Birdy Nam Nam rippin' it up throughout the Dominican Republic. Looks like Rocky & friends pissed away RCA/Polo Grounds' big budget allotted towards "Wild for The Night" and director Chris Robinson just happened to tag along and film all the hi-jinx that ensued. We're talkin' about everyday/above-average shit like hanging out on rooftops, gun-toting children, practicing karate kicks with friends, seducing hunnies on the beach, motorcycle burn-outs, a late night club gig, etc. The always fashionable A$AP Rocky sports a number of DKNY x Opening Ceremony, Balenciaga, Goyard, Timbaland, Jean Paul Gaultier, Pyrex Vision, and Nike-accented outfits throughout the course of "Wild for The Night;" Skrillex even manages to sneak in an EXCLUSIVE, glitched out remix during the video's final minutes. While LONGLIVEA$AP's literally chock-full of great non-sequiturs, I guess my favourite lines here would have to be, "Benjamin 3 Stacks, it's a fact, she lives in my lap / on my OutKast, daddy fat, bitches on my sack / and you know them soaking."

Posted by Matt Horowitz at 7:19 AM