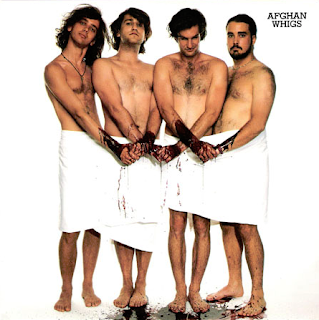 For argument's sake, I guess I've always been an Usher fan... or @ least an admirer of Mr. Raymond's sheer talent and work ethic. I can vaguely remember nervously asking a few P.Y.T.'s to dance to "U Got It Bad" (2001) @ those painfully cheese-tastic 7-8th grade dances. Paraphrasing Pitchfork staff writer Ryan Dombal, it was an oddly-matched collaboration that no one expected, let alone asked for. But somehow still managed to greatly surpass everyone's non-existent expectations: Friday night @ FADER Fort (SXSW), Usher wandered on-stage with The Afghan Whigs mid-way through their "Climax" cover. Frontman Greg Dulli & Usher then launched into spirited, guitar-driver renditions of both artists' more well-known tracks, "Somethin' Hot" and scorching set-closer, "OMG."


Former-Yeasayer member and solo artist Sinkane (Ahmed Gallab) came on stage to perform a super-Funky version of his own single, "Runnin'" with Usher & Afghan Whigs, too. This is by NO means a fashion blog and I wouldn't say I'm the most fashionable guy around, but WTF was Usher wearing; a 90's bucket hat and some sort of weird leopard print/leather jacket hybrid!? ha. Usher lamented @ one point, "This [one's] all about havin' a good time, cause that's what SXSW is all about. Just findn' the groove and enjoying yourself!" The FADER filmed and uploaded HD video of The Afghan Whigs' complete 40-minute set and Usher comes out around the 15-minute mark. After sending out some good vibes to hospitalized and seizing friend, Lil' Wayne, Usher even came back out for an a capella encore once the band left the stage; We're talkin' about sparse, beat-box-backed renditions of "Bad Girl," "U Got It Bad," and "Lovers and Friends."