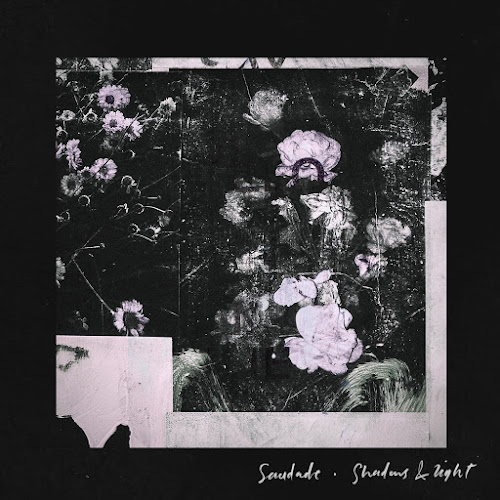 Saudade is a music collective/super-group formed by "composer of futuristic worlds" and producer Chuck Doom of †††, Team Sleep, and THoly Ghost fame. Saudade formed around 2016 and features a wide array of musicians, artists, producers, and creative types; the crew's various members "contribute musically based on their expertise" and includes Chino Moreno (Deftones,) Chelsea Wolfe, David Torn, John Medeski (Medeski Martin & Wood,) Gil Sharone (Marilyn Manson,) Dr. Know (Bad Brains,) Mackie Jayson (Cro-Mags,) Robert Thomas Jr. (Weather Report,) Chris Bittner, and graphic artist, designer, and photographer Frank "Flem" Maddocks. Maddocks has designed covers for everyone from Metallica to Jason Derulo and, actually, designed the cover for Saudade's latest single. Upon their 2016 formation, Saudade quietly released a self-titled single made available exclusively through BitTorrent, although, its Chuck Doom-directed music video has since been made widely available. Just yesterday, completely out-of-the-blue, Saudade returned with their first single in some three years: "Shadows & Light" Feat. Chelsea Wolfe & Chino Moreno. "Shadows & Light" boasts that same brooding, Apocalyptic sound we've all grown to know and love through Moreno's past bands and side-projects Deftones, †††, Palms, Team Sleep, etc. although, unlike "Saudade," it features vocals atop said cascading instrumental. While there are still currently no concrete signs of a proper Saudade full-length or EP, it definitely sounds like this isn't the last we'll be hearing from the Chuck Doom-helmed collective...


"The musicians contribute musically based on their expertise. Frank [Maddocks] did the artwork for our new release and we have him on board going forward to do more. Chris [Bittner] is part of the production team with Chuck [Doom]. It's not a singular band, but, rather, a music collective, as from song-to-song, there may be different contributors. It started as an instrumental-based project, but we always knew there would be vocalists integrated at some point (now, the Chelsea [Wolfe] release,) as well. You can expect more of both going forward. We felt Chelsea would be perfect for the "Shadows & Light" song. So, we simply took a chance and sent it to her. She loved it and said she wanted to be involved. I can't tell you exactly what our release plans are... only that we don't "necessarily" plan to go about things the conventional way. I will say that there is definitely more to come and it will not be another 3 years of waiting."

Posted by Matt Horowitz at 9:09 AM