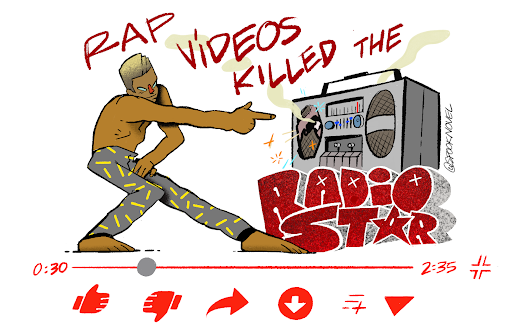 How's it going, ladies and germs of the music-loving Internet? Today, we here at The Witzard are proud to present to you, a brand new column: Rap Videos Killed The Radio Star. It's a collection of six of our personal favorite music videos released within the past month or so. Also, full disclosure: my wife and I are leaving for our honeymoon to Italy this upcoming Wednesday and I just wanted to do a bit of a wrap-up/send-off of some Hella dope new music, before temporarily signing off for a couple weeks. This inaugural edition of Rap Videos Killed The Radio Star showcases choice selections from Blockhead Feat. billy woods, Open Mike Eagle & Breezly "Breeze" Brewin, BULLIES AKA Denmark Vessey, DRXQUINN & Azarias, ILL BILL & Stu Banga with Goretex, Knowledge The Pirate, Reckonize Real & Guilty Simpson, and Zilla Rocca. I would also, like to send a very special shout-out to the directors of these very music videos: Mr. Oz (@claytoi,) Lil Kydd, Shawn Johnson (@oldsoulbrother1,) Jimmy Johansson, John Luxe & Knowledge The Pirate, and Bob Sweeney (@sweeneybob) respectively, as well as Robert Kupiaj at BULLIES' label, FXCK RXP RXCXRDS.


"I'd like to say I had all sorts of input with the concept and process, but it was all Mr. Oz. Aside from giving him pictures of the rappers and me, he just took an idea and ran with it. That’s great for me 'cause I'm not typically an "idea man." I was very happy with the final product. My last video was "The Music Scene," so that set a high standard. With this, I wanted to go a completely different direction... Dying by laser gunpoint at the hands of two shapely aliens is, actually, my ideal death. So, that worked perfectly for me," Blockhead tells HIPHOPDX, who hosted a #DXCLUSIVE Premiere of "Slipperly Slope" Feat. billy woods, Open Mike Eagle & Breezly Brewin AKA Breeze Brewin of The Juggaknots & The Weathermen. For me, personally, Mr. Oz's claymation-aided concept for "Slippery Slope" harkens back to the days of MTV's recently revitalized Celebrity Deathmatch. Blockhead's first proper studio album since 2017's Funeral Balloons, FREE SWEATPANTS, is now available to purchase directly from billy woods' very own imprint, Backwoodz Studioz. In addition to billy woods, Open Mike Eagle & Breeeze Brewin, FREE SWEATPANTS also, features appearances from Aesop Rock, Tree, Homeboy Sandman, Armand Hammer (billy woods & ELUCID,) Vic Spencer, Marq Spekt & Hemlock Ernst.


"BULLIES is an Independent Hip-Hop collective based out of The Midwest, consisting of emcees Denmark Vessey & DRXQUINNX, as well as producer Azarias. Denmark Vessey is a well-established emcee reigning from Detroit, Michigan, whom has worked with artists, such as Quelle Chris, Open Mike Eagle, Yasiin Bey (FKA Mos Def), Jean Grae, etc. as well as creating classic records, such as Cult Classic, Martin Lucid Dream, Buy Muy Drugs with Azarias, and Sun Go Nova produced by Knxwledge & Earl Sweatshirt. DRXQUINN (pronounced "Dr. Quinn") is an upcoming producer/emcee based out of Chicago. He has had the opportunity to work with such artists as Vic Spencer, Chris Crack, and Mogillah, as well as gain feature on Denmark Vessey's song, "Sellout" with Vic Spencer off the album, Sun Go Nova. Azarias is a producer from Fort Lauderdale, Florida. Aside from being the other half of Buy Muy Drugs (with Denmark Vessey) and being a prominent member of Chicago's beat scene, he has made notable production for artists such as Nappy Nina, Grill Billyenz, and Tanya Morgan. BULLIES いじめっ子 is a mixture of heavy bass, Boom-Bap, minimalistic beats with aggressive and "over-the-top" lyricism with mixed content ranging from "straight bars" to subtle pieces of socio-economic issues of today. BULLIES delivers beyond conventional Hip-Hop of today."


"CANNIBAL HULK is the collaboration between producer Stu Bangas and lyricist ILL BILL. Prior to ever working together, both BILL & Stu traveled in similar circles; both heavily worked with Vinnie Paz (Jedi Mind Tricks/AOTP) which led to Stu being on BILL's The Grimy Awards and BILL being featured on Stu's albums with Esoteric & Blacastan. Having worked together on those tracks is what led to the manifestation of this project. Add to the scenario their love of comic books and the concept [of] CANNIBAL HULK was born. With both feeling most at home with aggressive music, this album sonically sounds exactly as its title indicates. CAN HULK features Vinnie Paz, Goretex, Slaine, Snak The Ripper, and DJ Eclipse," reads a recent press release from FatBeats. CANNIBAL HULK will be released on Friday, March 29th in conjunction with Uncle Howie/Brutal Music - All Wrongs Reversed. "'Hulk Meat" ILL BILL & Stu Bangas featuring @Goreziti—sample I used for the beat provided by Rob Viktum—CANNIBAL HULK available for pre-order now at CannibalHulk.com and FatBeats.com," Stu Bangas (@StuBangasBrutalMusic) ecstatically shared on Facebook Thursday afternoon.


Knowledge The Pirate is an emcee, producer, and CEO of Treasure Chest Entertainment. Knowledge has worked with mega-stars, such as Will Smith, Teddy Riley, Pharrell Williams, Rodney Jerkins, and Rockwilder. For the past 10 years or so, Knowledge The Pirate has been the right-hand man and secret weapon to friend and fellow emcee and producer, Roc Marciano. Together, Roc & Knowledge, along with their teams, have helped revitalize 90's Gangsta/Hardcore Hip-Hop made famous by The Geto Boys, Ice-T, N.W.A. Nas, Wu-Tang Clan, and their contemporaries. Knowledge The Pirate has been involved in the creation of nearly all of Roc Marciano's various projects since 2010, as well as providing guest features and A&R. Treasure Chest Entertainment released Knowledge The Pirate's long-awaited solo debut, Flintlock, last summer in conjunction with ART DEALER, FXCK RXP RXCXRDS, Tuff Kong Records.

Flintlock received wide-spread critical acclaim from publications such as Complex, Pitchfork, and UndergroundHipHop. Now, less than a year later, Knowledge The Pirate has returned with his Flintlock follow-up, BLACK CESAR, with production work throughout from e.le.m.n.t. Don Cee, Roc Marciano, and Knowledge The Pirate himself. I actually, saw Knowledge on the side-stage during Roc Marciano's performance at The Franklin Music Hall in Philly a few weeks ago as part of THE WHITE BRONCO TOUR with Action Bronson & Meyhem Lauren; although, I've since heard Knowledge bowed out of the rest of the tour to put the finishing touches on BLACK CESAR. "SCIENCE BORN" produced by e.l.e.m.n.t. is our first taste of BLACK CESAR and it has an equally hard-as-nails video to go along with it. Knowledge The Pirate's BLACK CESAR will be released this upcoming Monday, March 18th on Treasure Chest Entertainment/Tuff Kong Records.


"When Reckonize Real approached me for this video, he already had an animated clip done for it. We felt the clip, (although, dope) didn't match the feel of the track. I pictured something more sinister, grimy, scary, trippy for the visuals. A while back, I made a clip for an artist named Erstatz Splynter. I had used a similar concept: possessed mannequins invading a home and tormenting the occupants. I used the same concept for this one. Except with this video, they murder the drug-dealing occupants, fuse themselves with the furniture and other objects and walls, and then, proceed to smoke out. I took inspiration from [Herbie] Hancock's "Rockit," Michael Jackson's "Leave Me Alone," and Talking Heads' "[And] She Was." Those three videos have been a huge influence to me."

"The song itself was the last recorded for the Carved from Stone album, almost like an after-thought. Guilty had knocked out four joints, then, went on tour Overseas. Deff CuTz started mixing and I was like, "man, we need one or two more joints for this to be a solid EP." I remember when I was sending beats back-and-forth with Guilty, he liked that one, too, so we made it happen. To me, it has a different drive than the other songs and being the only one without a feature, it felt right to be the one to get video treatment. Plus, the line "f**k that, the whole world's my astray" just needs to be vibrated throughout the universe and forever live in video. [The first] video production didn't go as planned and delayed it's release into 2019, but it turned out to be for the best. Shawn gave the song life in video, plus, it was just praised in print for LDT ED Magazine."


"Gunshot Jazz" is a simple, no frills, yet extremely effective single-shot music video directed by frequent Career Crooks/Zilla Rocca collaborator, Bob Sweeney. Zilla Rocca himself had this to say about the self-produced track during our recent Future Former Rapper All-around Breakdown feature: "With "Gunshot Jazz," I had both the beat and song done previously for projects that either never dropped or were rejected. As I was arranging the album, I didn't feel the need to inject a lot of my own beats into the album, but whatever beat I chose, it had to be a BANGER. I was going back through my beats and felt like this joint would be strong enough to hang with the other producers. And it reminded me of the first 5 O'Clock Shadowboxers album, The Slow Twilight, we did in 2009, sonically. So, I wanted to touch on that style on Future Former Rapper just to cover all of my bases with styles I've flipped over the years. I found the rhymes and hook in the stash and they fit perfectly. Plus, the title, "Gunshot Jazz," was a line I said on the first song on the last Shadowboxers album that I always wanted to use again. So, it all fit together perfectly." Zilla Rocca is already hard at work on Future Former Rapper's proper follow-up, '96 Mentality, as well as projects with long-time friend and collaborator Small Professor as Career Crooks, GRIFT COMPANY with Curly Castro, and Call Out Culture with Def Jux veteran emcee, ALASKA.

Posted by Matt Horowitz at 9:15 AM