Astronaut Records Track In a "Tin Can:" Chris Hadfield - "Jewel In The Night" (Int'l Space Station) 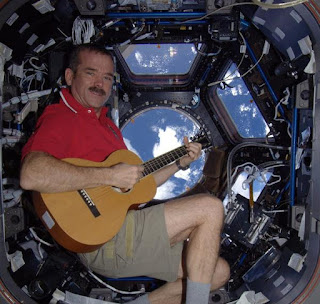 When taken quite literally, David Bowie's Folk Rock-laden "Space Oddity" (1969) is about an astronaut "sitting in a tin can, far above the world" gazing back down @ his home planet from the depths of outer-space. But I bet Ziggy Stardust, nor anyone else for that matter, would've ever imagined that a man could actually manage to write/record a song in a Canadian space shuttle orbiting over the Mediterranean. I've always been pretty fascinated with NASA, space travel, constellations, etc. But this most recent technological advancement is CRAZY/cool on a whole 'nother level!; Chris Hadfield has been steadily updating us mere Earthlings through Facebook, Twitter, and Reddit during his long, tedious process of launching into space.


The infamous space recording has been rumored for a while now and "Jewel In The Night" was finally released on December 23rd, just in time for Christmas. I'm guessing Hadfield somehow transmitted the raw audio/video files and recording back down to the Canadian Space Agency (CSA), which were soon uploaded to Soundcloud and YouTube. Chris Hadfield penned "Jewel In The Night" on an acoustic guitar that's been sitting around the International Space Station (ISS) since about 2001. Hadfield's next inter-galactic musical project will include Barenaked Lady, Ed Robertson and ground-breaking new technology that'll "perfectly synchronize a transmission that travels @ least 600 kilometers." So basically, Hadfeild & Robertson will be collaborating through sheer space and time on the recording, appropriately dubbed "I.S.S. (is Somebody Singing?").