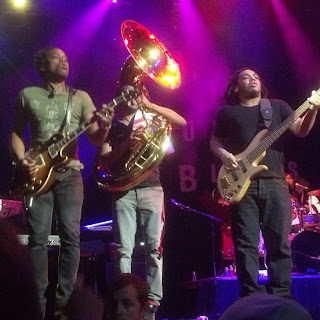 Let me just start out by saying that I've been a die-hard Roots fan for about 10 years now, since The Tipping Point (2004). But after seeing The Legendary Roots Crew LIVE @ House of Blues last night [Dec. 28th], while their frequently-released studio albums are great sounding, they pale in comparison to the band's FAN-FUCKING-TASTIC stage show. We're talking about a gang of Classically-trained musicians playing blazin' solos and breaks... synchronized Motown dance routines throughout and when drummer ?uestlove accidentally pummeled into the wrong beat mid-song, he and his Philly-bred buddies just laughed it off and kept going. The best damn thing about a Roots show is the sheer unexpected, versatility of the material to pull from - Nearly 14 records-worth of Hip-Hop/Deep Soul, a feat which most seasoned Rock "N" Roll bands couldn't even rival.


Black Thought & ?uestlove proceeded to lead bandmates Captain Kirk, Tuba Gooding Jr., Frank Knuckles, James Poyser, Kamal Gray, and Mark Kelley through a dynamic 2 1/2-hour set full of spirited hits and covers: "Proceed," "All Night Long," "Sweet Child O' Mine/Mannish Boy," "Radio Daze," "The Seed 2.0," "Cosby Show Theme," etc. Looking back @ the setlist today, I think "Get Busy" and "How I Got Over" were the Funkiest re-tweaked versions that really got the crowd movin' & groovin' the best; The previously-recorded studio versions really do what The Roots managed to perform last night absolutely NO justice! But with that said, the Rising Down and How I Got Over edits are great in their own right and I've posted those down below. While I've tried to use my Grade-A Journalistic "chops" to describe The Roots/House of Blues show, mere words just aren't gonna cut it... But I guess IMMACULATE, AWESOME, SPECTACULAR, FUNKY, RIVETING are a good place to start. The Roots' LIVE performances are few and far between anymore, so make sure to catch them if you can! But until then, you can see The [Square] Roots perform on Late Night with Jimmy Fallon 5 nights a week.