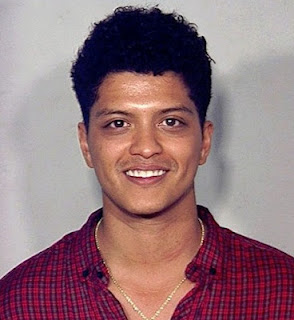 The Police were a 1970-80's Reggae-tinged Classic Rock band, who would in turn inspire Hawaiian Blue-Eyed Soul singer, Bruno Mars some 35 years later; an influence that's especially noticeable on his latest single, "Locked Out of Heaven," which was recently remixed by zombie-slaying Dancehall king, Major Lazer. Between recording/releasing Doo-Wops & Hooligans (2010) and it's proper follow-up Unorthodox Jukebox, Mars got slapped with coke possession and slowly started straying away from his "cookie-cutter" image. Sound-wise, Unorthodox Jukebox is a little more edgy and Experimental... cause Bruno Mars & The Smeezingtons [production team] linked up with a bunch of A-List producers: Jeff Bhasker, Mark Ronson, Benny Blanco, Supa Dups, and Paul Epworth. If we're excluding his stripclub anthem - "Money Make Her Smile" (Diplo), "Show Me" is quite arguably one of the album's most interesting tracks. It's a tried and true Roots Rock Reggae jam that Mars pain-stakingly melded together along with Kingston's very own Supa Dups. I'll just go a head and let the good people over @ okayplayer-affiliate Large Ups explain the rest, but just give this album an honest shot... even if you're a "Just The Way You Are" hater. Unorthodox Jukebox is out now, and I really think it seems like the next gradual progression for Bruno Mars' ever-growing New School/Blue-Eyed Soul career.


"Say what you will about Bruno Mars - and we'll be the first to tell you we're not in love with a lot of his stuff - but Hawaii's first Pop Super-star makes music with broad appeal. His new album Unorthodox Jukebox lives up to its name, with a little sum'n for everybody, and that includes us... For track No. 8, "Show Me," Mars and his songwriting team The Smeezingtons linked with Supa Dups and his Black Chiney production partner, Mitchum "Khan" Chin. Dups and Mars have already established a strong track record with their work on 2010's Doo-Wops & Hooligans, most notably the Damian Marley collaboration, "Liquor Store Blues." Just like that one, this isn't your typical, watered-down Pop star version of Reggae. Right from the opening drum shots, you can tell "Show Me" is the real deal... While Dups' riddim brings the moody, rub-a-dub vibes, Mars' vocals conjure that era as well, with echoes of Sugar Minott and Gregory Isaacs. Any way you slice it, though, this tune is a scorcher."