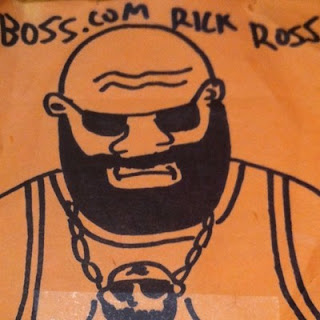 Actor-turned-musician Jamie Foxx described a track he recently produced during a Django Unchained/Success Secrets interview as "more or less, an Ennio Morricore Spaghetti Western theme, except with Rick Ross rapping on it." Tom Breihan's article was published in Men's Health last month and now the track in question, "100 Black Coffins," was finally released to the masses late Friday afternoon. It's a pretty interesting juxtaposition overall because for a good chunk of his bars, Ross raps from the perspective of Foxx's character - Django, a la ODB's CLASSIC delivery on "Ghetto Superstar;" Django Unchained follows the story of a freed slave who ends up morphing into a ruthless bounty hunter @ the hand of Dr. King Schultz (Christoph Waltz) and seeks out revenge and his long-lost love, Broomhilda. Quentin Tarantino additionally cast Leonardo DiCaprio, Samuel L. Jackson, Jonah Hill, Kerry Washington, and Don Johnson [Miami Vice] in supporting roles for his "Southern Spaghetti Western" flick, which hits theatres nation-wide on Christmas Day. Django Unchained's companion soundtrack is out about a week earlier, December 18th, and features a bunch of new/old tracks from James Brown & 2pac, John Legend, Jim Croce, Frank Ocean, and Ennio Morricore.


"In addition to the new original songs, I am also using a lot of older recordings on the soundtrack — many of which came from my personal vinyl collection. Instead of having the record companies give me new digitally cleaned up versions of these recordings from the 60's and 70's, I wanted to use the vinyl I've been listening to for years — complete with all the pops and cracks. I even kept the sound of the needle being put down on the record. Basically because I wanted people's experience to be the same as mine when they hear this soundtrack for the first time."