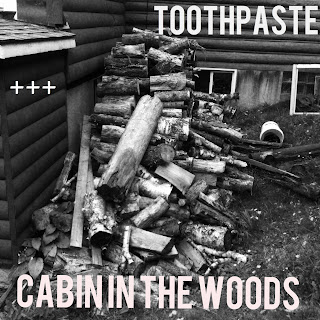 (1) What's up, Kassa & TECLA!? First off, it's a pretty bold statement releasing your first mini-collection on the last day of the world! Was that intentional or just completely random?

2) How would you guys describe the overall sound of CABIN IN THE WOODS EP? What sorta music influenced it's creation, cause it's pretty unique sounding!

Both of us come from musical backgrounds with extremely wide varieties. TECLA went from Classically trained pianist to Punk Rock front-girl, and Kassa went from Jazz drum virtuoso to mosh-pitting rapper so... When stuck in a cabin in the woods together, I guess this is what came out.

(3) Let's just say today is the end of the world, for arguments sake... What are your plans for the day/night, all things considered?

Same thing we do every day, pinky...

(4) Is the apocalypse a running theme on CABIN IN THE WOODS EP and if not, what were you going for?

We didn't actually have a theme. We decided to go to a log cabin in Maine for a week without expectations or distractions and this is what came out.


(6) How long has CABIN... actually been in-the-works? Kudos on the last-minute release! A lot of times, I think music sounds better without all the hype.

We actually only worked on it for 7 days in a cabin a few months ago. Robert Lux mixed it a few days ago. That's about it. We also agreed not to hype it up or play it for anyone until it came out.

(7) Aside from CABIN..., what sort of tracks might be featured on each of your apocalypse playlists?

Probably E-40 until it turns dark, then might throw on some Nina Simone and Radiohead for that depressing phase of the apocalypse... Then maybe some Bob Marley when you realize everything is actually fine.

(8) Can we talk about that cabin/log-filled cover for a minute? I'm always intrigued by album artwork and his it links to the music...?

That's the cabin we recorded in... That we chopped up and burned after we were done.

(9) What's your take on the whole Das Racist break-up announcement, Kassa? Did you really see this coming or were you just as surprised as all the rest of us?


We been known. All good. Much love to all 3 homies! - TECLA

Yeah we knew there were problems. Always were, but I kind of thought deep down that they would stay together and keep bickering like an old couple. - Kassa

(10) When can we expect to hear that full Peaceful Solutions project with Kool A.D.? What other musical projects are you working on, Kassa? TECLA?

I will be dropping a single and music video entitled "Fake Tears" in January followed by my solo album, "We Are The Lucky Ones" in March. Just signed with management company and label Mayimba Music and we are launching a full PR campaign with Girlie Action right after the new year so LOOK OUT YA HURD?????? - TECLA