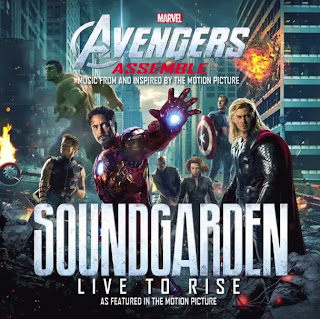 That horrible Timbaland-produced "Dance album" aside, Chris Cornell has really worked with a wide array of talented friends-musicians over the years; Whether it be Audioslave (Rage), Maynard James Keenan, Eddie Vedder Temple of The Dog, "Alice Mudgarden," Rick Rubin, or his Seattle-based Grunge band... Soundgarden. While they originally formed back in 1984-1997, Soundgarden re-formed in 2010 along with the simultaneous rise/demise of both Rage Against The Machine and Audioslave. Back in the day, Soundgarden released a string of successful Alternative Rock hits, Superunknown will soon celebrate it's 20th anniversary [2014], and they definitely managed to forever change the face of Modern Rock music. But frankly, having an original song attached to a $200 million opening weekend film, The Avengers, is an entirely different animal!


"Live to Rise" is Soundgarden's first new track in roughly 15 years, since Down on The Upside; Grafting Chris Cornell's signature wail against Kim Thayil's heavy guitar riffs and Matt Cameron & Ben Shepherd's aggressive, yet rhythmic drum/bass work. Surely to the immense delight of fans far and wide, Chris Cornell recently alerted Rolling Stone that Soundgarden's forthcoming [comeback] album has in fact been recorded. After sessions were wrapped last week, it was sent off to be mixed and mastered... if all goes well, the new album should see a September-October release! Honestly, if you have yet to see The Avengers, you're slacking. Great movie, equally great song, and look out for "Live to Rise" during the closing credits.

"For a band like Soundgarden, being associated with [The Avengers] - for what it's about and what they accomplish in it - it's a pretty good way to have a partner in the entertainment business to get your songs out in front of people... It used to be absolutely the forbidden fruit for any band - if you put your song in a commercial you were screwed. I've never felt like that was a no-no."

Posted by Matt Horowitz at 6:23 PM