Give Up, 10 Years Later: The Postal Service - "A Tattered Line of String" (unreleased) 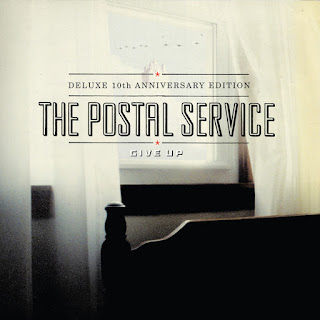 The Postal Service are what you could call a "guilty pleasure," a band that represents a certain phase in my life, and about as far as I ever delved into Electro-Pop/Emo, thankfully ha. It's Ben Gibbard's side-project that released one widely-acclaimed album, Give Up (2003), which most fans, including myself, actually prefer more than Death Cab for Cutie. While swirling rumors about a follow-up and band reunion have always gone unrequited, the only thing to really materialize since Give Up is a recently re-released 10th anniversary 2-CD set. Sub Pop even managed to convince Ben Gibbard and in-house producer Jimmy Tamborello (Dntel) to finally reunite for a lengthy 36-date summer tour, along with sometime(s) members Jenny Lewis and Laura Burhenn on background vocals and additional instruments.


"A Tattered Line of String" is one of 2 new, previously unreleased tracks included on Give Up: Deluxe 10th Anniversary Edition, which is currently available at a record store near you. Give Up's re-issue now includes nearly every Postal Service song ever recorded and released: Phil Collins, Flaming Lips, and John Lennon covers, plus a gaggle of glitched-out remixes, and spirited re-cover album versions from Iron & Wine and The Shins. "A Tattered Line of String"'s companion AB/CD/CD-directed music video follows an average guy just trying to do his laundry in a laundromat that curiously spins along with it's washing machines; like the bulk of The Postal Service's material, it's a tale of love at first sight, loss, and utter confusion. Here's a handy-dandy little Tweet from Sub Pop, "The decade-in-the-making @PostalService television debut is tonight on The @ColbertReport! Tune in at 11:30/10:30c."
Posted by Matt Horowitz at 1:23 PM