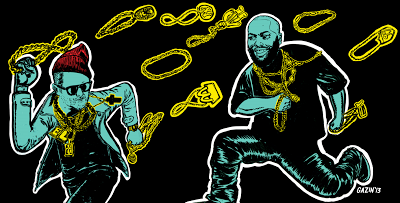 
While Run The Jewels is far from a feature-heavy project, El-P & Killer Mike still managed to phone in a few powerful guest spots: UK singer-producer Until The Ribbon Breaks, super-producer Prince Paul (De La Soul), and former Dungeon Family general Big Boi. It's more or less a care-free and less politically-charged affair in stark contrast with El-P & Killer Mike's slightly more serious, collectively gloomy past work(s); "Five tracks in and so far, Run The Jewels is a real good soundtrack for feeling pretty good about the world," Tom Breihan cheerfully Tweeted, so I guess it shows! Maybe it's a little early to go ahead and crown a Record of The Year and all... But I think Run The Jewels is already amongst the top of the class for 2013's strongest albums (so far), right alongside modern day Industrial-Rap masterpiece Yeezus. Anyways, if you aren't convinced by now, maybe you should just go ahead and get back to that One Direction CD ha. But for those that can hang and self-admittedly enjoy the finer things in life, see if you can track down a 6-pack of Run The Jewels x Goose Island's micro-brewed pale ale!
Posted by Matt Horowitz at 10:51 PM