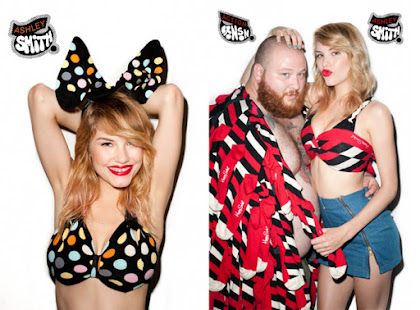 It's been proven time and time again that Action Bronson can essentially rap on almost any beat (or lack thereof), generally Party Supplies-produced: Peter Bjorn & John, "A Very Bieber Christmas," Peter Gabriel/Phil Collins, Guns N Roses, etc. Bronson's a highly-skilled rapper, who I can attest, can even rap impeccably sans beat; I had the honor of catching him on the XXL Freshmen Live 2013 mini-tour (Philly) last night, along with Joey Bada$$ and Big K.R.I.T. Far from the rookie of the group, Action Bronson somehow managed to go on first around 8:30pm, bummed a hearty joint off a crowd-goer... and completely SLAUGHTERED the majority of SAAAB STORIES, "Steve Wynn," a couple choice cuts with Meyhem Lauren, and of course, some shit-talking compliments of Big Body Bes.


For his latest featured track, Bronson teamed up with a very unlikely set of collaborators, Skrillex-signed Dubstep group What So Not (OWSLA). "Every Time You See Me" (The Quack) is a glitched out bass-wobbling kinda jam that debuted over at SPIN roughly 2 weeks ago and will see an official release on The Quack EP on June 25th. Bronson is joined by rapper D. Mac and acting "mixer" Blood Diamonds on the WUB WUB WUB/club-ready track. "'The Quack" is everything we love about this project," What So Not lamented on the track's sheer genesis... "Create the strangest sound possible and turn it into an infectious rhythm. It's a stomper with character, not your everyday 808 banger. It's raw and real!" Honestly, both the guys have tremendous skills, cause I don't know how anybody could rap so well on such a crazy non-Hip-Hop, essentially pocket-less track like "Every Time You See Me!" While he's currently still working on his VICE Records/Atlantic long-player, Action Bronson and producer buddy Harry Fraud just unleashed their new sun-soaked 7-track EP, SAAAB STORIES, back on June 11th.
Posted by Matt Horowitz at 9:40 AM