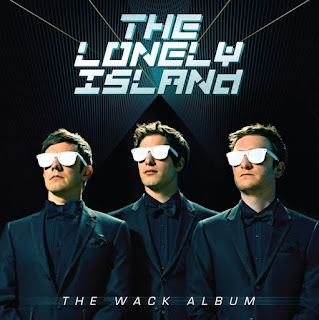 
It's littered with a stream of ingeniously well-crafted non-sequitors that I guess in some sort of weird alternate Hipster-verse, could dual as slick dance moves ha. Not to mention, The Lonely Island have successfully recruited Euro-Dance queen Robyn to sing obnoxious things, too... It's all 1/2 rapped-shouted in an all too painfully realistic double-it-up style, but some of "Go Kindergarten"'s most instantly memorable lines would likely include: "Now punch your friend - punch, punch your friend," "Now ladies, whip your dick out - whip, whip your dick out. Don't ask how, just fuckin' figure it out," "Now make your booty speak - teach that ass English," and Robyn's soulful closing hook, "So raise your glass, then break the glass. Then stomp your bare feet on the glass." The Wack Album is out today (June 11th) on Universal Republic and features a handful of all-star guest spots from Justin Timberlake, Billie Joe Armstrong, Solange, Hugh Jackman, Kendrick Lamar, Lady GaGa, Pharrell, and gruff veteran rapper Too $hort.
Posted by Matt Horowitz at 9:01 PM