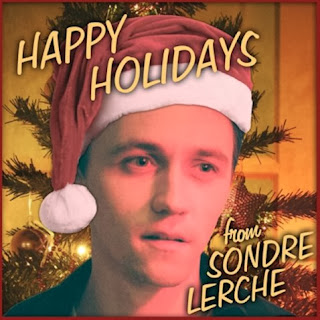 It's become something of an annual tradition; every December, Norwegian singer-songwriter Sondre Lerche picks his favourite year-end track, re-records his own unique version, and sends it over to Stereogum's headquarters. This yule tide season, he's conjured up a sparse acoustic-laden cover of "Wrecking Ball," effectively eliminating any remaining ounce of TWERKIN', debauchery, and mega-studio sheen. But in it's own right, "Wrecking Ball" is an incredibly well-written, dare I say... modern day power-ballad (for lack of a better term), and maybe Sondre Lerche's version can help some naive-minded listeners finally see that! In recent years past, Lerche has sent Stereogum staff writers a few interesting Animal Collective, Owen Pallet, and Beyoncé covers.


"I had trouble finding [a song] that I felt truly motivated to interpret. So, while "Wrecking Ball" may not be my very favorite song of 2013, it turned out to be the one I would most likely play to at 3am last night," Sondre Lerche lamented in a quick web-statement. "It was my friend, producer, and drummer on this recording, Matias Tellez, who suggested we try a little Miley Cyrus this season. We recorded it live at Skogen, [his] studio in Bergen where half of my next record [was] recoded... It's a robust little f**ker. A song that can withstand inhumane acts of TWERKING, over-exposure, and yet another unwarranted cover," he continued. For those interested, I've also included a couple Miley Cyrus-related tidbits within this very post: a step-by-step "Wrecking Ball" ornamant and Terry Richardson's now-infamous companion video. Merry Christmas to all... "and a Festivus for the rest of us;" It's about time to eat, drink, and be merry!