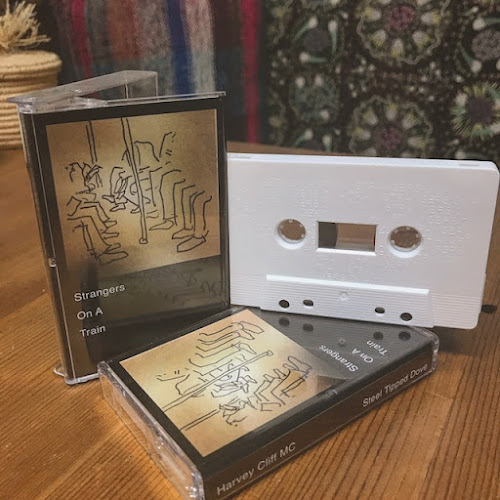 Harvey Cliff MC is a rapper, producer, singer, stand-up comedian, graphic artist/designer, and self-described "poetic polymath of vibrations, stimulations, and alternate universes," seemingly hailing from Kentucky. He's been recording and releasing his own unique band of Nerdcore Rap/Psychedelic Hip-Hop since 2015 on V-Neck Records and at some point, made his way to New York. There, he met eccentric Brooklyn-based music producer and recording engineer, Steel Tipped Dove. Harvey Cliff MC & Steel Tipped Dove first met at the now-defunct Bar4 in Brooklyn "back in the late aughts," as Cliff puts it. "He's one of the nicest and humblest dudes I know. I've been wanting to release something with him forever, so glad that it finally happened," he enthusiastically continued. Harvey Cliff is, of course, referring to his April 2018 released 8-track collaborative EP with Steel Tipped Dove, dubbed Strangers On A Train (SOAT.) Not unlike Cliff's past V-Neck solo releases—HELLO AGAIN/COME ON IN double-EP and A Midsummer Night's Siamese Dream—the SOAT EP was recorded, engineered, mixed, and mastered by Steel Tipped Dove at Quarter Two Nine Studios in Brooklyn, which sits directly above the once-legendary dance and night club, Southpaw.

Harvey Cliff told The Witzard over email that he keeps a sketch book full of people he regularly draws on the train, while en route to Quarter Two Nine, which ultimately, ended up directly inspiring the concept behind Strangers On A Train. Steel Tipped Dove has previously worked with Hip-Hop heavy-weights, like Armand Hammer (billy woods & ELUCID,) Astronautalis, Kemba FKA YC The Cynic, Lakutis, mc paul barman, PremRock, Quelle Chris, scallops hotel AKA milo, and Third Man Records emcee SHIRT. Harvey Cliff MC, on the other hand, runs his own label imprint, V-Neck Records—which includes other group projects he's involved in, like Pretty Goslings with DJ Tommy Mizzla', Art Theevz, and Hoju Magic Band—and was recently featured within a Bandcamp Daily column entitled The Best New Hip-Hop on Bandcamp: April 2018. Harvey Cliff was kind enough to provide The Witzard with an exclusive track-by-track breakdown of Strangers On A Train, which you can read in all of it's unedited glory down below. Strangers On A Train is now available to purchase or stream on both Bandcamp and Soundcloud, as well as limited edition laser-etched Mystery White cassette tapes. Harvey Cliff MC & Steel Tipped Doves' Strangers On A Train tapes will become available at 12 midnight Thursday, May 24, 2018, along with complimentary SOAT Instrumentals."

"[Steel Tipped] Dove is not stingy with his beats because he makes hundreds a month. Regardless, I'm sure he had Pusha T in mind, when he sculpted this banger, but as soon as I heard it, I cried like a baby. "Why don't you give me beats like this!!!?" I screamed. I assumed SHIRT or Lakutis had already laid claim to it. Instead, he just looked at me, laughed and said, "OK, I just made this beat two minutes ago, you want it, it's yours." At which point, I got super-nervous 'cuz I had no idea what I was going to do with it. However, the lyrics bubbled up the longer I marinated on it and the track came together in one take. I'm happy for Pusha to hop on the remix, [though]! Holla!"

"This track was one of the first I ever made with Dove around four years ago, when we first met. I think, I have at least 10 versions of it; I loved the lyrics, but hated my delivery. Ultimately, I settled on a quiet growl, since my straight voice clashed with the murky cosmic slop that's swirling within. This is the closest I'll ever come to dropping something that sounds like an MC 900 Ft. Jesus track—for those that don't know, peep "The City Sleeps" and you'll hear what I'm talking about."

"Once [Steel Tipped] Dove and I had agreed to work on an exclusive album together, he sent me this beat and said, "I can imagine you over this one" and the pressure was on. If someone hears you before you hear yourself, it can be very intimidating, but once I had the chorus, everything else fell like dominoes. The second part of this track was a separate track we'd been working on, but when I suggested to Dove that they might gel together, he worked his usual wizardy and merged it, like magic."

"I was a struggling, snotty-nosed kid from Kentucky spending one of his first sweaty studio sessions at Quarter Two Nine Studios. Dove had loaned me some beats to write rhymes over and I had just wasted 30 minutes of his time working on a track that was just awful stuff. It was Experimental, I'll leave it at that. Had Dove ever let on what hot crap I'd just dropped on his mic, I probably, would've packed up my notepad and never returned. Instead, he said, "is that all?" and I meekly said, "I wrote rhymes for one other track." As soon as he pressed Record, I was so nervous, I jumbled all the words and it came out sounding ridiculous, which is why you hear me laughing, at the beginning. That's Dove looping the track back, like nothing ever happened and laughing along in the background. Then, that studio magic happened; always indescribable and I nailed it in one take. Dove said, "I'd f**k with this." We never spoke about that first song ever again lol."

"This track is amazing!!! Total lightning in a bottle-type sh*t!! One of my old school homeboys that sat in the back of class with me in high school talking YO! MTV RAPS everyday had come up from TX to NYC and hit me up. We met over by Barclays Center and were getting our drank on, when he said, "let's go hit up your boy [Steel Tipped] Dove at his studio" and luckily, Dove was home chilling. He made this beat right in front of us and we were wildin' like, "daaaaaaaamn" and then, asked if Fletch wanted to hop on the mic. He started telling a story I had totally forgotten about—in my mind, it wasn't McDonald's. I remember it being Steak 'n Shake, [by the way]—and while the beat was rocking, I found rhymes that matched the energy of the track perfectly. His country flow needed to be on this album and it's the perfect "Side B" fire-starter for the cassette."

"I guess, every rapper gets nostalgic, when they write rhymes. The song lyrics I'm singing at the beginning were from a buddy of mine's Punk band he formed in the 90's. I always had one of their rehearsal demo tapes and I loved the track, "Buzzcut." Naturally, it reminded me of my experimental days searching for surreal life experiences. The story about me and my buddy streaking a bowling alley is 100% truth. Sh*t happened in slow motion; one moment on top of the world and exhilarated, then, just at the moment we were to bust through the other doors to escape... instead, we slapped them like a bird hitting a window. Everyone was laughing. We could see the car-full of our friends dying laughing and my buddy was already halfway back running the other way, so I really got it bad. Fairly certain someone has a blurry pic of my white a$$ running back thru the bowling alley to escape."

"This was a beat I heard on one of Joe [Steel Tipped Dove]'s beat tapes and I wrote rhymes over it and brought it to the studio. He was like, "haven't I already released this?" So, I was a little nervous that he'd nix it, but he seemed happy with the layers I provided and it made the final cut. I kept replacing a lot of the original samples I'd used and eventually, realized I'd essentially, used all Ghostbuster samples for the track lol. I don't really think that's a bad thing, [though]. It fits the feel and aesthetic of the rest of the album."

"We needed on more track to finish the album and I felt it only appropriate to pull out a really old beat Dove had given me, when we first started working together so many years ago. I was heading over to the studio and thinking about what great memories I'd made and couldn't imagine my life in Brooklyn, if I didn't have access to such a cool and relaxed studio. When we were about to begin, I realized I had left my lyrics for the track at home. Joe said, "you've been doing this long enough. Let's just cut a demo and go from there." Needless to say, everything that we laid down that day remained. The only extra samples were from my [Kentucky] homeboy Ron Ron. He had gone to see Big K.R.I.T. that night in Louisville and had been drinking triple-pours of Jack. I think, we've all received blackout drunk voicemail message from our friends, but how many of us get the chance to put them to such good use? I don't think he will ever be leaving me another voicemail the rest of his days LOL." 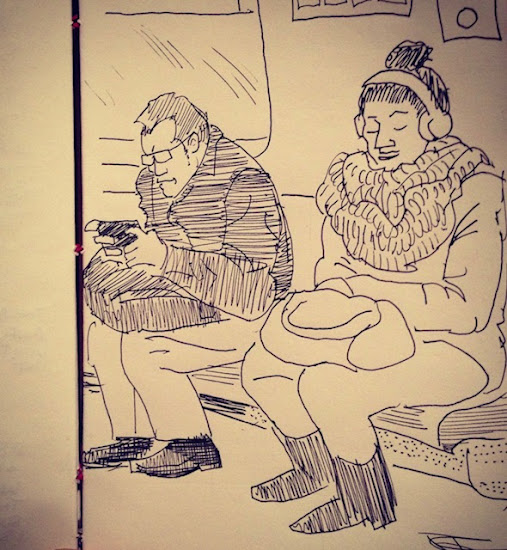 Posted by Matt Horowitz at 9:26 AM