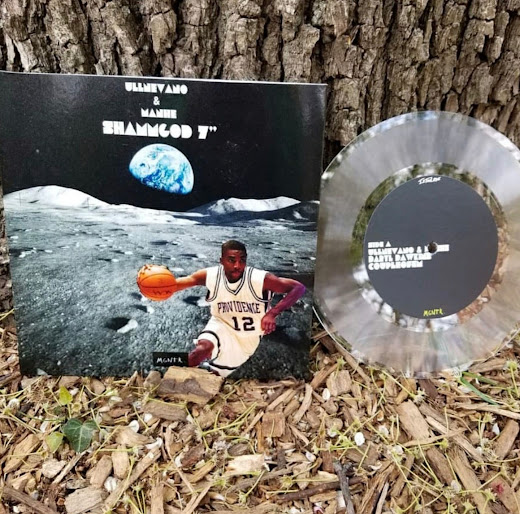 Fresh on the heels of his marathon 4-Hour Tour this past Saturday, May 5, 2018 with The Ghost of Len Bias EP collaborator John "Jumbled" Bachman, Baltimore emcee UllNevaNo has returned with his latest slam-dunk of a release, SHAMMGOD; a 9-track EP consisting of tracks first released during UllNevaNo & MANHE's weekly #SHAMMGODWEDS Soundcloud series. Now, properly re-collected as simply SHAMMGOD on a special lathe-cut 7-inch and limited edition cassette tape released by MGNTK. and Illinois-based In The Lake Records (ITL Records) with a bonus MANHE instrumental entitled "Coupleofem." SHAMMGOD EP is of course, named after notorious Washington Wizards player and Dallas Mavericks assistant coach God Shammgod FKA Shammgod Wells, but this is far from UllNevaNo's first basketball-themed release. Lest we forget, Neva's illien rosewell-produced Confidence Is Everything II (CIE2) released during the 2015-16 Season on ITL Records, "WRK." produced by Ohbliv, and The Ghost of Len Bias EP with Jumbled. SHAMMGOD boasts features from MGNTK. affiliate Yung D' The Pilot on "Girls Pt.2" and JBerd—who released OVERTIME CD's on the label last year—on "Downtown." SHAMMGOD was recently featured within the latest edition of okayplayer's weekly Mixtape Monday column, along with releases from the likes of Maja 7th, Tokayo, OSHUN, Fly Anakin & Ohbliv, Foisey. Stimulator Jones, and more. UllNevaNo & MANHE's SHAMMGOD EP is currently still available from both MGNTK. & In The Lake Records in either super-limited clear lathe-cut 7-inch, limited edition icy blue cassette tapes, 7-inch & cassette combo-pack, or standard digital release; however, supplies are extremely limited and once they're gone, they're gone for good!


"Baltimore emcee UllNevaNo and Norfolk, Virginia producer MANHE have released consistent bangers of raw Hip-Hop for purists that truly respects the craft and artform. The duo brings to the masses SHAMMGOD, a metaphor stating that Neva is nice with the rhymes and treats his lyrics similar to God Shammgod's handles by keeping the ball on a string surpassing so many defenders, who attempted to guard him. "Check Me Out" is Neva's cover letter for this album. MANHE captures classic nostalgic Boom-Bap vibes, as the Baltimore emcee effortlessly boasts how nice he is with the raps. "Fight Klub Pool Table," which has been getting plenty burn on Rap Is Outta Control SiriusXM, finds Neva paying homage to the vintage battle league and showing that he can bring that same energy to the airwaves as a Funk Flex freestyle. "Time Wasted" finds the intricate emcee getting more personal and expanding his versatility, touching on topics ranging from the struggles of a local rapper to exposing faults in a love interest relationship. SHAMMGOD is an album filled with layers that has to be decoded after a few listens and shows drastic growth from the Baltimore emcee."

Posted by Matt Horowitz at 9:20 AM