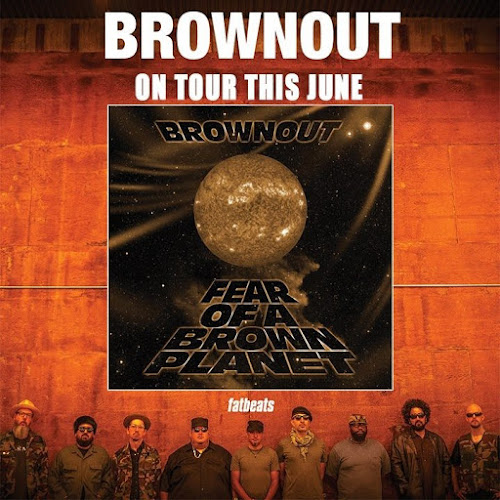 After releasing two EP's-worth of material as Brown Sabbath, Brownout has temporarily hung up their Prince of Darkness-referencing moniker in an exchange for a simple proposition from Fat Beats label owner/founder Joseph Abajian AKA DJ Jab. "I thought their sound would work covering Public Enemy songs. It was good to know they were P.E. fans... we came up with a tracklisting and they went to work," Abajian further detailed within a recent press release. A few years later, Fat Beats is proud to present Brownout's FEAR OF A BROWN PLANET—a cascading, 12-track instrumental Public Enemy (PE) covers album delivered in a similar manner as El Michels Affair's 2009 full-album Wu-Tang Clan tribute, Enter: The 37th Chamber. Following a bit of digital sleuthing and Journalistic 'detective' work, I was lucky enough to get in direct contact with Mohammad at Fat Beats, Ryan at Press Junkie PR, and eventually, Brownout guitarist Adrian Quesada himself. I'm ecstatic to be presenting to you, a comprehensive interview with Quesada, largely focusing on FEAR OF A BROWN PLANET, as well as an album's-worth of original Brownout material slated to be released next.

I. So, Fat Beats' founder Joseph Abajian (@FBdjjab) initially approached Brownout with the idea to create and record FEAR OF A BROWN PLANET, correct? Now, would you mind telling us a bit about the album's origin story?

Fat Beats approached us at a show in Los Angeles. We had been coming off the Brown Sabbath thing, which went on for a few years and were working on an album of original music. We were, also, about to release an EP with a sort of tongue-in-cheek title: "Over The Covers." Fat Beats had the idea, we were set on continuing with our original music, but the idea was too good to pass up.

II. How did you guys approach re-recording the tracks to be included on this album? I would image it was tough to make them sounds close enough to the Public Enemy originals to be recognizable, but different enough to sound distinct and original!

It was extremely daunting to start the album. The original songs are such masterpieces, technically and emotionally, that there was no point in trying to just make carbon copies; they also, aren't just based off one sample, a Soul tune or whatever, they are dense soundscapes that are harmonically and melodically all over the place. That's also, not easy to do with live instruments. We thought we'd strip it down to the core and build from there. I imagined what it would be like for The Bomb Squad [PE's production team] to have bands from their source material—i.e. Kool & The Gang or The J.B.'s—in the studio and what that would sound like.


III. What was the extent of Brownout's involvement in the creation of DJ Eclipse's "Fear of a Brown Planet Mix?" How did you feel about hearing Brownout's re-creations paired with Public Enemy's original vocals?

Eclipse ran with it on his own! We had very little to do with it. He absolutely KILLED IT! You can tell how much time he put into it, very detailed and all killer. It completely blew our mind to hear what he did. Gave me goose bumps to hear [it] with the vocals.

Brown Sabbath was more about rehearsing the music ahead of time and arranging it before we went into the studio with FEAR OF A BROWN PLANET, we stripped it down to the core sample, laid down some grooves to tape as a rhythm section, and then, built it back up. Some were meant to be horn features as instrumentals, some keyboard freak-outs, and some soundscape.


V. What was your typical recording/composing process like and how many time did you (honestly) listen back to Public Enemy's Fear of a Black Planet and other relevant albums, while recording FEAR OF A BROWN PLANET?

Typical recording process was listening to the originals, then, putting them away and studying the samples. We jammed for hours on simple grooves, sometimes, adding changes, but sometimes, piecing an arrangement together, after the fact. Then, I would listen to PE over and over again to pick out the nuance of the samples and how they played off each other, the accidental artifacts and sounds that happened.

VI. What, in your personal opinion, was the most challenging part of recording FEAR OF A BROWN PLANET?

Making something people would recognize, but making it our own.


VII. Who else, in addition to Brownout's stand members, worked on FEAR OF A BROWN PLANET? According to the album's press release, Run The Jewels' long-time touring DJ, DJ Trackstar contributed "turntable scratches," correct? I'm guessing, he's featured on "Trackstar The DJ (Terminator X) to The Edge of Panic," right?

Yes, Trackstar made an appearance on the record. We had a slew of guests: Kelly Finnigan from Monophonics, The Soul Supporters, Shawn Lee, keyboard player Peter Stopschinski, and many more.

VIII. Brownout has already released full-album re-creations consisting of material from both Black Sabbath and Public Enemy; however, who else might you fellas like to re-interpret on similarly-minded albums in the near future?

To be honest, at this point, that's not really anything we've discussed. We're having fun with the PE stuff right now and how to perform it live, but also, starting to plan for our full-length of originals.


IX. Do you currently have any immediate plans to perform studio or live versions of any of the album tracks with emcees or singers?

We are embarking on a West Coast tour this Summer and will have a few guest emcees live.

X. What's next for Brownout/Brown Sabbath and any of your assorted side-projects? I've recently heard rumblings of an album consisting of original Brownout material slated for 2019... is there nay truth behind these rumors?

Brownout is mixing an album of original music right now. It's a little more epic and Psychedelic. Heavy on the vocal tunes with singer Alex Marrero being featured more as lead singer than our previous group vocal-heavy approach.