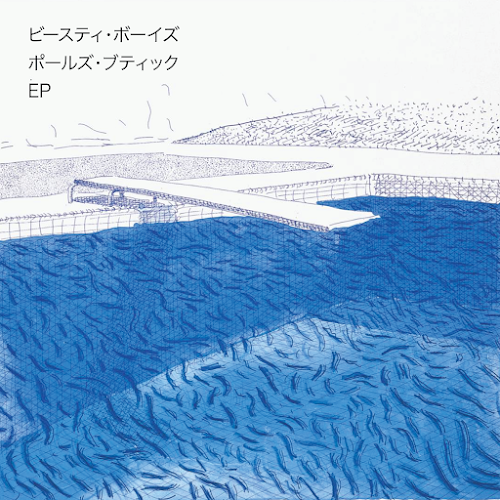 "Paul's Boutique was and continues to be a mysterious object, definitely, more than a just record. By now, everyone knows that when it came out in 1989, it wasn't the follow-up people expected, after Licensed to Ill; an opportunity for the Beastie Boys to weed out the real fans from the rest. To this day, Paul's Boutique is the Beasties' album we know [the least] about. At the time, they did only a handful of interviews, between television and magazines. Even the photographs from that period—mostly, shot by Ricky Powell—are not that many. Still, the record was light-years ahead of it's time and even if the whole sampling approach is similar to De La Soul's contemporary 3 Feet High & Rising., it's success and reputation has only gown over time. Now, it is (rightly so) considered a unique masterpiece that could not be made today or probably, ever again. Maybe, it's because of the whole concept the Beasties put into the record—the cover, the tons of Pop culture references and samples, the lyrics on the sleeve that don't match the lyrics on the record, etc.—that it has become a "legendary" output and hasn't lost [any] of it's mysterious aura."

"On the contrary, it probably, continues to grow year after year. And it has inspired a bunch of people to go deeper, beyond the few known facts and even, get creative with it. There are not one, but two books by Dan LeRoy dedicated to everything about the record. There has been a limited comic book, ASK FOR JANICE, by Jim Mahfood (Tank Girl, Web of Spider-Man,) and even, a Paul's Boutique - A Visual Companion to go along with the whole record. Turntable wizards DJ Cheeba, DJ Food & DJ Moneyshot created the "Caught In The Middle of a 3-Way" Mix, an amazing tribute to the record and it's samples. That's the same playground where this new, brilliant BB PB EP has been created. Who, how, why, and everything else you can read in the following interview..." TT5BR's BB PB EP (or Beastie Boys Paul's Boutique Extended Play) is a concise, yet extremely expansive EP full of 5 remixed, re-imagined, and alternate versions of The Dust Brothers & Matt Dike's multi-layered productions. It was pain-stakingly produced, composed, and arranged by TT5BR in a similar manner as the original 1989 recording, in an effort to sound period correct within the Beasties' ever-evolving catalog.

I. Aside from the quite obvious sources, what were your greatest sources of inspiration and influence while creating and recording your BB PB EP?

Most of my musical ideas, I get when cycling, being out in nature, or right before sleep. For this project, I think, all sources of inspiration were kind of obvious... like most Hip-Hop producers, diggin' for samples and listening to a lot of different albumss from all kinds of genres gave me a lot of ideas... live [Beastie Boys YouTube] videos would, usually, get me pumped to fire up Pro Tools and actually, work on the project.

II. What might you deem your earliest or most fond memory of hearing either Beastie Boys or Paul's Boutique?

Most fond: seeing them perform live for the first time during the CYH [Check Your Head] Tour at The Amsterdam Paradiso. It [was] freaking hot that day, venue totally packed. They came out with "Slow & Low" and the crowd went nuts—instant mosh pit!


III. What you classify as your overall concept and self-imposed perameters behind your BB PB EP (Beastie Boys Paul's Boutique Extended Play)?

The idea was to come up with remixes/alternate versions that stayed close to what they were doing on the album/original versions. From selecting samples to how to process, layer, and arrange them. For instance—with a few exceptions—they were using entire loops; there was no intricate chopping, extreme pitching, or filtering going on yet. So, that became an important restriction throughout the project. I "cheated" on a couple of loops, which I chopped up and re-constructed differently to make them fit better, but I don’t think you'd be able to hear... unless, you'd recognize the samples.

IV. What was the most difficult or challenging part you encountered while creating your BB PB EP?

Sticking to the earlier mentioned restrictions was a bit difficult, at times, because I would have all sorts of crazy ideas popping up that might have sounded nice, but wouldn't fit the concept. So, besides loops, I also, trashed a lot of ideas. The biggest challenge, though, was deciding when a song was finished.

I would've loved to do the entire album, but these were the only vocals I had access to, unfortunately.

VI. What did your primary sample-flipping, beat-making, and recording processes generally entail?

The tracks are all built from scratch around the vocals, so that was my starting point for all of the songs. Most [of my] time was spent going through downloads, trying to find suitable loops. I would have digging/listening sessions first. Usually, going through "heaps" of downloads, collecting loops and pieces that might fit one of the songs. Once in Pro Tools, I would try them against the vocals and as the tracks progressed, against all elements/layers already in there. For every loop you hear in the final versions, I trashed maybe up to 30 other loops for some of the songs. Once the main loops would be in place, I would keep adding and adding and arranging stuff. I re-created parts of the original versions, using the same sample sources as on the album, for some of the tracks. Most of the scratches were done later during the process, I think, right before mixing. I kept replacing, deleting, and/or adding and re-arranging samples during mixing, as well. Mastering, I didn't do myself.


VII. What types of reactions have you received from either Ad-Rock & Mike D or die-hard Beasties fans concerning your BB PB EP?

None lol. I don't think they are aware and I don't think they would really care? But who knows. From BB connoisseurs—mostly, on the BB Forum—so far, feedback has been really positive, which, I think, is a huge compliment. Yours and a couple of similar reactions: not being sure about the origins of the remixes, had me laughin'!

VIII. What do you plan to start recording and eventually, release next? I know we've spoken about a number of potential projects?

I hope to, one day, finish TT5BR, the project I initially, started working on: To The 5 Boroughs remixed in a mid to late 80's type of sound (think LTI [Licensed to Ill] and Run-DMC's Raising Hell sparseness.) But up next, will most likely, be BB CYH [Check Your Head] EP. I started working on "SWW" ["So What'cha Want"] and "PTM" ["Pass The Mic"]. Not sure what else the EP will include yet. Oh, maybe, some highly limited dub plates in-between. I heard today from my partner/friend, who, actually, came up with the idea of vinyl releases. And online... maybe, drop some of the out-takes.


IX. What can you potentially tell The Witzard's readership about your freshly-pressed and just-released limited edition BB SYR HL 12-inch?

Besides they need to order ASAP? Well... it truly will be limited to this small run of 300 copies. And if you're into Hip-Hop karaoke... it has the instrumentals, as well.

X. How did you come up with the cover design for your BB PB EP and how exactly does it relate to the Beastie Boys or Paul's Boutique?

Reading about The Grasshoff's house and watching the "HL" ["Hey Ladies"] video inspired me to use a swimming pool for the cover art. In line with how the EP was made... I "sampled" a lithographic print by world-renowned artist, David Hockney. He painted/drew quite some LA swimming pools. This one, I liked, in particular; with the transparent vinyl, we tried to reinforce the whole pool/clear water idea. 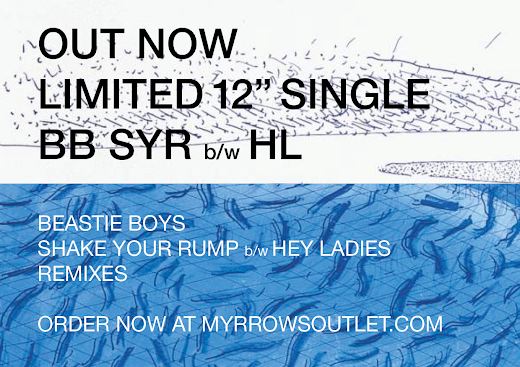 Posted by Matt Horowitz at 8:16 AM