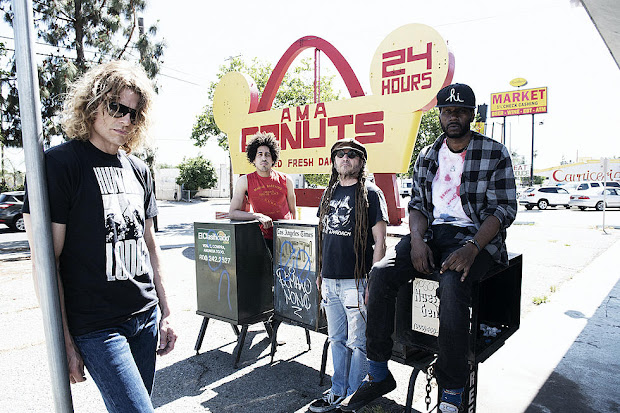 OFF! the Punk/Hardcore super-group, which, since its 2010 inception, has featured Circle Jerks & ex-Black Flag frontman Keith Morris, guitarist Dimitri Coats (Burning Brides, Ten Commandos,) bassist Steven McDonald (Redd Kross, Melvins/Dale Crover Band,) and drummer Mario Rubalcaba (ex-Rocket from The Crypt, Hot Snakes.) OFF! have been fairly quiet since the release of their 2014 EP, Wasted Years, but all that has changed as of yesterday afternoon: OFF! unleashed a frenzied cover of Metallica's "Holier Than Thou" from their upcoming expansive 53-song tribute to The Black Album fittingly dubbed The Metallica Blacklist.


Along with it came a music video, a new band/press photo, an announcement they were signing to Fat Possum Records for re-issues and future releases, and news they were working on a new album, as well as a long-planned Sci-Fi feature film. Nestled amidst all that news was the above photo taken by Jeff Forney, in which McDonald & Rubalcaba are noticeably absent and it appears as though they both exited the band in 2020. OFF!'s newest iteration now includes bassist Autry Fulbright, II and drummer Justin Brown, ex-...And You Will Know Us By The Trail of Dead, Vanishing Life, Flying Lotus, and Herbie Hancock, respectively.


"Holier Than Thou" serves as Fulbright & Brown's premiere appearance with OFF! and it's without a doubt a total ripper! It channels that Punk/Thrash-leaning energy heard across Metallica's earliest of works and I won't give away too much, but the companion music video is great, too. OFF! have drafted David Yow (Flipper, The Jesus Lizard,) Angelo Moore (Fishbone, ex-Murphy's Law,) writer, director, and actor, Derrick Beckles, cosplayer, model, and actress Chloe Dykstra, and a who's-who of note-worthy heads. It's definitely something to experience and there will be lots of goodies to look forward to from OFF! in the coming months. OFF!'s rendition of "Holier Than Thou" is now availble on streaming services. The Metallica Blacklist will become available on Friday, September 10, 2021 on Metallica's own imprint, Blackened Recordings.