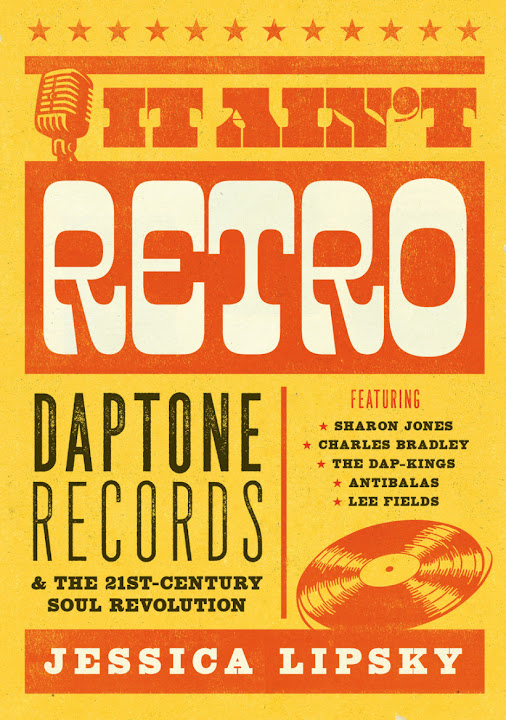 "This is a sampling of Daptone Records' output over the past 20 years, including an Amy Winehouse track The Dap-Kings played on and a single from German group, The Poets of Rhythm. The Daptone Family Tree is huge and varied, so honing in on just a few tracks is tough! From the Desco Records years to today's Penrose Records imprint, Daptone has put out everything from raw Funk to Gospel and Cinematic Soul to Afrobeat. I chose a handful of my favorite tracks from each of the label's major acts to showcase the breadth of the label's output. Although, I'm a hardcore Sharon Jones fan, some of my favorite tracks on [the playlist] are from other artists—check out The Altons' "When You Go (That's When You Know,)" bassist Benny Trokan's hypnotic "Turn Back You Fool," and Dapttes Saun & Starr's "Sunshine (You're Blowing My Cool.)"

"It Ain't Retro is a powerful reminder of the enduring power of Soul music to influence and inspire newer generations of artists and audiences alike. Lipsky shines a light on stories that, until now, have rarely been shared, adding, literally, new chapters to a 60-plus-year history of Soul's importance on the global stage." - Oliver Wang, Pop music scholar, writer, and DJ

"All Sharon Jones ever wanted was recognition—not only for herself, but for the whole Daptone Family and The Soul Scene. We proved that Soul never "died" and It Ain't Retro is a solid chronicle of our collective effort." - Binky Griptite

Soul is the most powerful expression of American music—a distinct combination of roots, migration, race, culture, and politics packaged together for your dancing pleasure. But if you thought the sounds of Motown or Stax Records died along with 8-tracks and macramé, you'd be wrong. For two decades, Daptone Records has churned out Hard Funk and such beautiful Soul that these records sparked a musical revolution.


With a collective of Soul-obsessed producers and musicians, the Brooklyn-based independent label launched the careers of artists such as Sharon Jones & The Dap-Kings and Charles Bradley, while providing sonic support for the likes of Amy Winehouse, Bruno Mars, and Lady Gaga. Daptone's records—and those of the larger Soul revival scene—pay homage, but never lip service to the original artists, proving that Soul is still culturally-relevant and just as exciting as ever.

It Ain't Retro charts this revival's players, sounds, and tectonic shifts over the past 20 years, taking you from dingy clubs where Soul-crazed DJ's packed the dancefloor, to just Uptown where some of the genre's heaviest musicians jumpstarted the renaissance in a basement studio and all the way to The White House. This definitive tale of Daptone Records' Soulful revolution chronicles the label's history, players, and sounds, while dissecting the scene's cultural underpinnings, which continue to reverberate in Pop music. The book, also, contains rare and unseen images of Daptone artists past and present, including Sharon Jones, Charles Bradley, Lee Fields, Antibalas, The Sugarman 3, The Budos Band, and more.

Jessica Lipsky is a journalist and DJ from Brooklyn by way of The San Francisco Bay. She first encountered sweet Soul music as a child by obsessively tuning her radio dial and has since extensively covered Soul, Funk, Reggae, and Alternative Latin music. Her work on the intersection of culture, music, and politics has appeared in The New York Times, NPR, Billboard, The Recording Academy, Columbia Journalism Review, VICE, Newsweek, Wax Poetics, and LA Weekly. In her free time, she likes to boogaloo down Broadway. Jessica Lipsky's It Ain't Retro: Daptone Records & The 21st-Century Soul Revolution is now available for pre-order and will become widely available 8/10 on Jawbone Press.