Champion of The Underdog: An Appreciation of The Life & Work of Biz Markie, Vol. 1 By: Th' Mole of WEIRD RAP (Re-published) 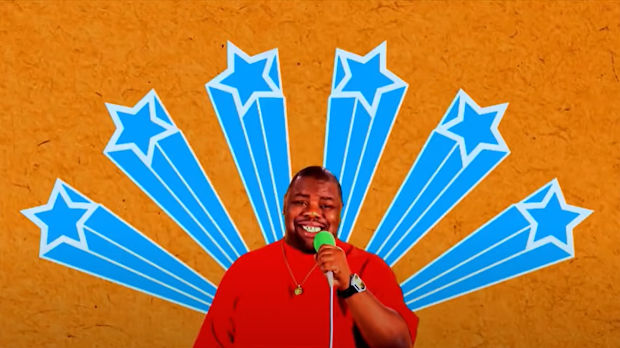 Marcel Theo Hall, better know as Biz Markie and oftentimes, affectionately referred to as The Biz, The Clown Prince of Hip-Hop, The Inhuman Orchestra, The Diabolical Biz Markie, and The Emizah-Emizah, was highly revered as one of the most genuine emcees to ever do it. Biz passed away on Friday, July 16, 2021 at the tender age of 57, likely due to complications from Type 2 Diabetes, although, no official Cause of Death has been revealed just yet. Biz Markie is most well-known for his infectious 1989 break-out single, "Just A Friend," but he was a truly multi-talented artist, as well. Biz Mark's lesser-known talents included beat-boxing, dancing, producing, DJ'ing, acting, singing, and song-writing.

It was proven time and time again that "Nobody Beats The Biz," but he surely didn't mind collaborating with just about anyone; racking up genre-defying features with everyone from the Beastie Boys to Spin Doctors. Biz's film and television appearances included roles on In Living Color, Men In Black II, black-ish, and Yo Gabba Gabba! as well as Paul Simon's "Me & Julio Down By The Schoolyard" music video. Since Biz Markie's untimely passing, his friends, fans, peers, fellow musicians, and admirers have been sharing their fond memories online. We'll attempt to collect some of the most meaningful tributes here with Champion of The Underdog: An Appreciation of The Life & Work of Biz Markie. Rest Easy to the man, the mouth, the legend, Marcel Theo "Biz Markie" Hall.


"Biz's death hits me hard. Not only was he a formative inspiration for me, as I found him when I was around 11 or 12 years old and not only did I continue to enjoy his work all through adulthood, but he exuded a certain sense of humility, sincerity, and humanity, which embedded him deep in my heart.

Of course, Biz was hilarious, of course, he had some of the catchiest production around and, of course, he was a great and innovative beat-boxer, but that's not all that made him special and beloved. He proudly represented the outsider—the underdog who overcame the odds to find success. But rather than succeeding by conforming to the norms of society and Hip-Hop, he found acceptance by letting his "freak flag" fly.

From 1987's shockingly shameless "Pickin' Boogers" single to 1988's "Vapors," in which he recounts tales of himself and friends being looked down upon in the past, Biz was unabashedly himself, warts and all, making admissions that your Rakims and Run-D.M.C.s would never dare speak and he did it with humor and flare. With the production assistance of Marley Marl and T.J. Swan's vocal hooks, the Goin' Off [1988] album was so catchy that even the most straight-laced B-boy couldn't deny how excellent it was, regardless of the mush-mouthed vocals and carefree lyrics.

But when Biz decided to go a step further with self-deprecation and letting it all hang loose, he really skyrocketed to fame. His 1989 sophomore album's debut single, "Just A Friend," not only framed him as a dateless loser, but he chose to sing the chorus, which was almost unheard of at the time. What's more, he sang in a bellowing, wild, and untrained howl, which the classical musicologist would consider an abomination. To top it off, the video showed him clowning in a white wig on the piano. In this way, he boldly played the fool to maximum effect and surprisingly, rather than being ridiculed for it, he was widely celebrated. I think that even the most serious street dude couldn't deny a certain affinity for Biz.

Following his heart's desire to sing, despite its jarring nature and even though he was warned against it, Biz crooned his way through other tracks on The Biz Never Sleeps, as well. "Spring Again" was another hit, while the sleeper cut, "Biz In Harmony," was an even further departure from Hip-Hop normality.

Not to rest on his laurels, I Need A Haircut (1991) emerged as, arguably, Biz's greatest album. Full of more self-effacement, inane humor, triumphant redemption tales, and excellent production, it included such greats as "T.S.R. (Toilet Stool Rap)," "What Comes Around Goes Around," "Romeo & Juliet," "Kung Fu," and "I Told You." Following The Biz Never Sleeps' classic cover art, I Need A Haircut arguably outdid it, the imagery evoking the same irreverent silliness and unabashed joy found in the music itself.

Although, I Need A Haircut suffered a major blow due to sample clearance issues around the Gilbert O'Sullivan-based "Alone Again" (yet another endearingly silly-sad outcast's anthem,) Biz cheerfully rose from the ashes in 1993 with All Samples Cleared! Complete with cover art mocking the recent courtroom drama around the "Alone Again" case, the album, again, delivered the goods with tracks like "Bad By Myself," "Family Tree," "I'm Singin,'" and the beautifully awkward Disco-Soul of "Let Me Turn You On."

While Biz's charm and originality has been largely recognized, it should, also, be noted that he produced the majority of his music, in addition to that of artists from Kool G Rap to Grand Daddy I.U. and the entirety of his cousin, [Diamond Shell's] album, The Grand Imperial Diamond Shell.

Unfortunately, Biz suffered from a sweet tooth and diabetes, which finally got the best of him this weekend. I can only hope that he's up in Heaven eating all the candy he wants, making out with the girl who told him she was "just a friend." Rest in peace, Prince Biz Markie. I've compiled a playlist of my favorite Biz tracks, including the aforementioned songs in this article, [see below.]"