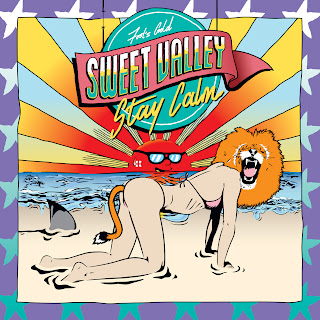 Now, this one should really apply to the gamut of college co-eds: Indie Rockers, Hip-Hopheads, Skater Punks, gamers, stoners, Hipsters bloggers, etc. ETERNAL CHAMP is a 13-track Instrumental Hip-Hop collection that's simply based around a bunch of samples pulled from Old School 1980-90's video game soundtracks. After a quick first listen, I hear bits and pieces of Sonic, Mario, Zelda, Donkey Kong, and random 8-bit arcade games. Brothers Nathan & Joel (KYNAN) Williams, acting together under the Sweet Valley moniker, recently recounted to Pitchfork that "The second one took a bit longer because we took a lot of samples straight from video game stuff. So, we had to play to certain levels to get the sounds that we wanted. We did a take that's all from Ocarina of Time, the N64 game." Nathan's the founding member of beloved Indie Punk band WAVVES and KYNAN is an amateur beat-making Hip-Hop producer.

"Sweet Valley is a Bermuda Triangle-like place, where cannabis crumbs, spilt beer, record dust and that mysterious shit you had to blow out of game cartridges all collect as if pulled by some gigantic junkyard magnet. Sweet Valley is a blood pact between two brothers, Nathan and KYNAN Williams, gone awesomely off the rails." (Bandcamp)

The Williams Brothers worked on ETERNAL CHAMP intermittently with their debut album - Stay Calm, which was just released on Fool's Gold Records last month. Nathan is currently mixing & mastering the new WAVVES album (2013) and Sweet Valley have supposedly managed to record and stock-pile 9 albums-worth of material! Nathan & KYNAN are headed out on a short Heathcliff Berru-organized US Tour running from Sept. 17-Oct. 26th with GZA and Killer Mike, where that'll perform separate DJ and guitar-backed MC sets. Adult Swim unveiled WAVVES' most recent single, "Hippies Is Punks" as part of their Summer-long singles series; Let's assume that it'll grant us a sneak peek into WAVVES LP #4... which Nathan, John [Hill] & Stephen self-funded, own 100% of the rights, and are currently shopping around to labels for an imminent release.
Posted by Matt Horowitz at 10:48 PM